The RNAi consortium (TRC) is a collaborative effort based at the Broad Institute of MIT and Harvard, and includes six MIT and Harvard associated research institutions and five international life sciences organizations. We have partnered with the TRC to make shRNA libraries available to researchers worldwide and has compiled shRNA libraries for applications, such as screening.

The pLKO.1 reagents can be packaged into virus particles for use in transduction experiments. Specifically, the replication-incompetent viral particles can be efficiently produced using lentiviral packaging plasmids co-transfected in 293T packaging cells. The Trans-Lentiviral Packaging System, which offers maximum biosafety and high titers, is recommended.

The TRC shRNA constructs were designed using an siRNA rules based algorithm consisting of sequence, specificity, and position scoring for optimal hairpins. The hairpin consists of a 21-base stem and a 6-base loop. The hairpins were cloned into the pLKO1 vector and sequence verified.

Multiple (4 to 5) constructs were created for each target gene. The pLKO1 lentiviral vector enables efficient transduction of primary and non-dividing cells, such as neuronal cells, making it easy to perform RNAi studies in these hard to transfect cell lines. Stable selection is also possible using the puromycin selectable marker.

Available controls include the pLKO.1 empty vector as a negative control and an eGFP shRNA as a positive control.

Citing the library in Scientific Publications

In scientific publications, the libraries should be referred to as TRC-Hs1.0 (Human) and TRC-Mm1.0 (Mouse). Individual clones are uniquely identified by their TRC ID number (eg. TRCN0000014783).

The TRC lentiviral shRNA libraries are provided in 96-well microtiter plates containing frozen stock cultures of E. coli in 2X LB broth with 8% glycerol and carbenicillin (100 µg/mL). Individual shRNA constructs are shipped as glycerol stock cultures on wet ice. We check all cultures for growth prior to shipment. 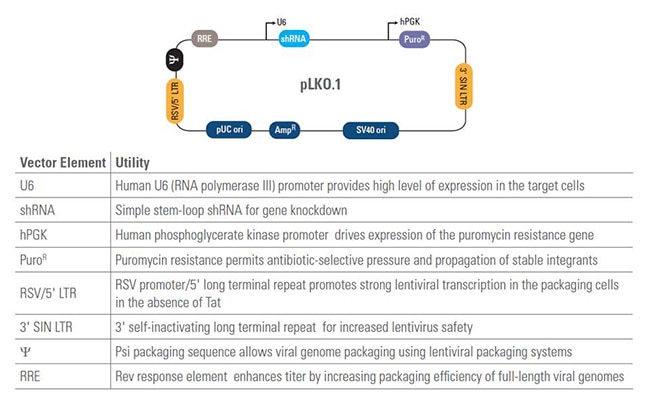 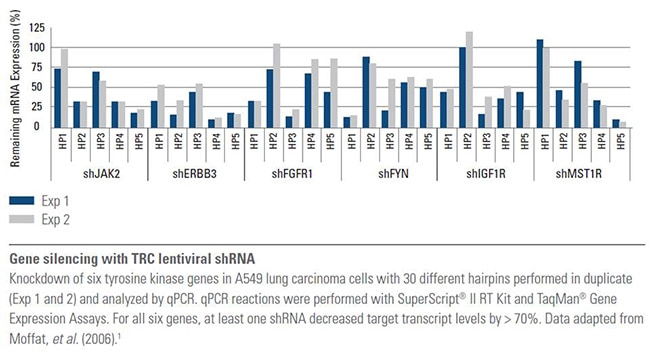