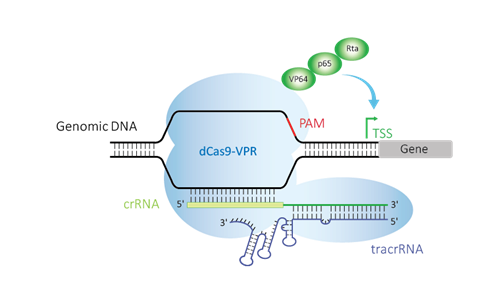 Both CRISPRmod systems (for CRISPRa and CRISPRi) use deactivated or “dead” Cas9 (dCas9), a variant of the Cas9 protein that is nuclease-deficient due to mutations in the RuvCI and HNH domains1. The CRISPRa system utilizes dCas9-VPR where the dCas9 is fused to three transcriptional activators VP64, p65, and Rta (VPR) on the C-terminus2.

Guide RNAs targeted upstream of the gene's transcriptional start site (TSS) can bind the dCas9-VPR and guide the complex to the DNA target site and enable up-regulation of the target gene. CRISPRa guide RNA designs are based on a published CRISPRa v2 algorithm3 and are different than the Edit-R guide RNAs which are optimized for functional gene knockout. The CRISPRa guide RNA can be either single guide RNA (sgRNA) or synthetic CRISPR RNA (crRNA) complexed with a trans-activating CRISPR RNA (tracrRNA) (Figure 1) enabling development of wide range of phenotypic assays for functional gene analysis.

In our study, we looked at downstream effects of IL1R2 transcriptional activation by CRISPRa in U2OS cells that stably express dCas9-VPR. IL1R2 is not expressed in U2OS cells, and upon transfection with an CRISPRa crRNA pool (four individual synthetic crRNAs) targeting the promoter region we observe strong activation of more than 10,000 fold (Figure 2B). This IL1R2 up regulation leads to down-regulation of IL6 and IL8 (Figure 2C) and up-regulation of ZEB2and GEMIN2 (Figure 2D), confirming literature predicted downstream gene effects and demonstrating that signaling of IL1R2 can be studied using CRISPRa. Get started now with CRISPRa »