What is CRISPR-Cas technology?

Short RNAs can be used to guide nuclease proteins to targets within complex eukaryotic genomes with high specificity, based upon a naturally occurring system for bacterial and archaeal immunity. Popularly known as CRISPR-Cas (Clustered Regularly Interspersed Short Palindromic Repeats) technology, these systems rely upon CRISPR-associated (Cas) proteins and have the potential to carry out genome editing functions or alter gene expression. The components of CRISPR-Cas9 genome editing systems can be combined in multiple ways for various gene editing applications.

What applications are possible with CRISPR-Cas systems?

The Cas9 endonuclease has become a popular tool for directed gene editing in eukaryotic systems [1-3]. With the use of a target-specific CRISPR RNA (crRNA) and trans-activating crRNA (tracrRNA), or a fused format called a single guide RNA (sgRNA), locations within complex mammalian genomes can be targeted by the Cas9 endonuclease for a double stranded break [1]. These breaks can be repaired by endogenous DNA repair mechanisms through a process known collectively as non-homologous end-joining (NHEJ). Because NHEJ is error prone, genomic deletions or insertions (indels) can result that create frame shifts and premature termination to permanently silence target genes. It is important to be aware that the insertions and deletions resulting from NHEJ are random and differ from cell to cell. The exact genomic changes that result can be determined by additional experiments on clonal cell lines. The crRNA, tracrRNA, and sgRNAs can either be transcribed intracellularly, in vitro transcribed or custom synthesized and introduced through transfection. Intracellular expression of Cas9 endonuclease can be accomplished by plasmid or integrated lentiviral expression vectors driven by constitutive or inducible promoters. Effective levels of intracellular Cas9 can also be delivered by DNA-free systems that have the advantage of exceedingly low possibility of additional genomic alterations, through transfection of mRNA encoding Cas9 or Cas9 protein delivery. 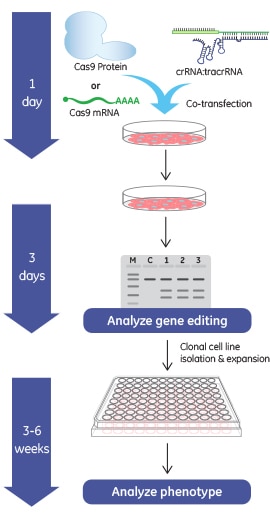 What does “DNA-free” CRISPR-Cas9 gene editing really mean? It means that your system uses no CRISPR-Cas9 components in the form of DNA vectors; each component is either RNA or protein. Starting with Cas9 mRNA or purified Cas9 protein as the source for Cas9 nuclease expression in genome engineering experiments has advantages for some applications. Why? The use of DNA-based Cas9 or guide RNA expression systems carries with it the possibility of undesirable genetic alterations due to plasmid DNA integration at the cut site or random lentiviral vector integrations. For this reason, a DNA-free gene editing system can be a good choice for creating engineered cell lines. If your experiment involves observation of a phenotype in a non-clonal cell population, you may not need a DNA-free option. However, if your experimental end-goal does not require enrichment of Cas9-expressing cells and you wish to avoid potential integration events, then consider using Cas9 mRNA or purified Cas9 protein.

The CRISPR-Cas9 induced double-strand break can also be used as an opportunity to create a knockin, rather than a target gene knockout. The precise insertion of a donor template can alter the coding region of a gene to “fix” a mutation, introduce a protein tag, or create a new restriction site. We have demonstrated that single-strand DNA can be used to create precise insertions using synthetic crRNA and tracrRNA with Cas9 nuclease. Alternatively, the activity of Cas9 can be altered to nick rather than perform a double stranded cut. The Cas9 nickase can be used with a pair of crRNA:tracrRNA complexes or sgRNAs targeted to two closely spaced regions on opposite strands, and when used with a short double stranded DNA, homology-directed repair can performed [2, 4].

With this application, Cas9 is modified so that it cannot cut DNA, and when combined with a guide RNA that targets a promoter region, the complex can reduce transcriptional activity and concomitant gene expression [5, 6].

By employing a Cas9 mutant that cannot cut DNA and to which a transcriptional activation domain has been fused, the expression of endogenous genes can be up-regulated by targeting the Cas9 fusion protein to the promoter region of an endogenous target gene, or multiple genes simultaneously [6, 7]. 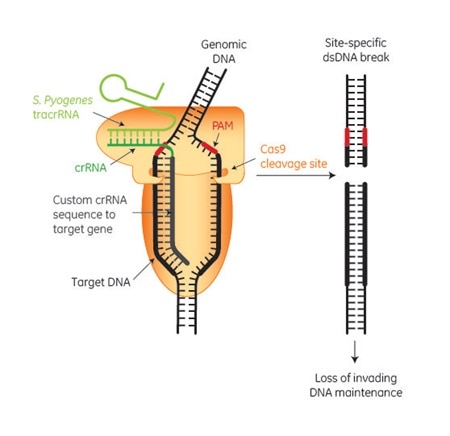 CRISPR-Cas systems can be used to rapidly and efficiently engineer one or multiple genetic changes to murine embryonic stem cells for the generation of genetically modified mice [8]. A similar approach has been used to genetically modify primate single cell embryos [9].

Pooled lentiviral libraries have been used at low MOI to perform genome-scale screens of cancer cell viability, pluripotency, and drug resistance [10, 11]. With single copy number integration, bi-allelic gene silencing can be accomplished with high frequency. Relative representation of genes involved in producing the phenotypic criteria of the screen (e.g. cell death, proliferation, drug resistance, etc.) can be identified by next generation sequencing.

The importance of CRISPR-Cas9 controls for experimental design

Negative controls are especially important for CRISPR-Cas9 experiments designed to be evaluated by phenotypic readouts. Changes in cell phenotype, viability or gene expression levels in cells treated with negative controls likely reflect a baseline cellular response that can be compared to the levels in cells treated with target-specific crRNAs for more accurate interpretation of results.

Although a natural synthetic two RNA (crRNA:tracrRNA) system is very efficient and cost-effective for most applications, researchers working with in vivo and ex vivo models have indicated a preference for a sgRNA system.

The timing of any gene editing experiment can be critical, especially when setting up a pooled screen, generating a stable cell line without risk of increased metabolic load, or integrating the Cas9 in a precursor state and performing an experiment in a later derived cell state. An inducible Lentiviral Cas9 Nuclease can provide the temporal control necessary to ensure editing only occurs when it is required.