Ensure your system is optimized for successful CRISPR-Cas9 experiments

The importance of effective controls in CRISPR-Cas9 experiments

The CRISPR-Cas9 system requires multiple components to be delivered to the cell for effective gene knockout, both a guide RNA and a Cas9 nuclease. Insufficient amounts of either component will result in poor gene editing.

Use of a species-specific positive control with our validated detection primers in a mismatch assay will verify the suitability of your experimental conditions for good CRISPR-Cas9 gene editing, and serve as an indicator of good transfection in ongoing experiments.

Our panel of Non-targeting controls permits assessment of potential non-specific effects, and lets you choose the optimal negative control for your cell type, and your assay.

DNA mismatch detection assays (SURVEYOR® or T7EI) using our detection primers are a relatively fast and high-throughput method for assessing gene knockout results in clonal or mixed cell populations. While they can only assess the relative percentage of insertions and deletions (not functional protein knockout), they are highly useful for:

Effective gene editing of PPIB in human and mouse cells 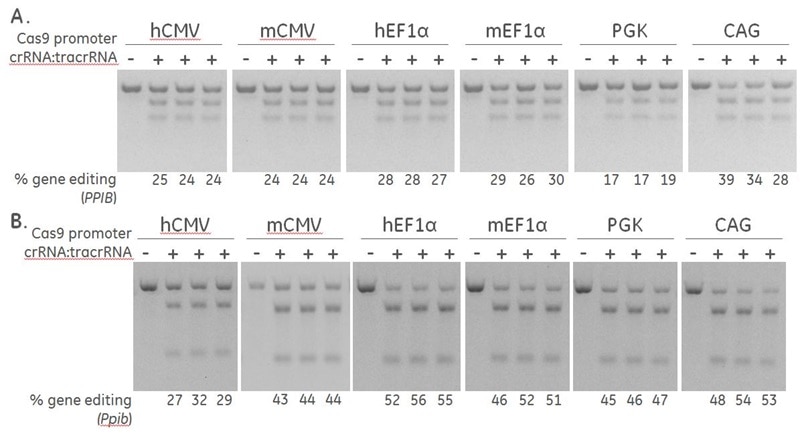 Positive control crRNA and Detection Primers targeting PPIB are used to determine the optimal promoter for driving expression of Cas9 nuclease. A human recombinant U2OS ubiquitin-EGFP proteasome cell line (Ubi[G76V]-EGFP) (A) and a mouse fibroblast (NIH/3T3) (B), were stably transduced with lentiviral particles containing Cas9 and a blasticidin resistance gene driven by the indicated promoters. A population of cells with stably integrated Cas9-blastR was selected with blasticidin for a minimum of 10 days before transfections. Cells were transfected with 50 nM synthetic crRNA:tracrRNA targeting Human PPIB / mouse Ppib using DharmaFECT 1 and DharmaFECT 3 Transfection reagent, respectively. After 72 hours, the relative frequency of gene editing was calculated based on a DNA mismatch detection assay using T7EI on genomic DNA extracted from the transfected cells.