siRNA is a synthetic RNA duplex designed to specifically target a particular mRNA for degradation. While siRNA provides the opportunity to induce gene knockdown in a variety of cell lines, their utility is limited to cells that are amenable to transfection of synthetic oligonucleotides.

Since siRNAs achieve transient silencing, experiments are limited to relatively short time frames on the order of 2-4 days. siRNAs can also be used for knockdown of non-protein coding genes, such as long noncoding RNAs (lncRNA).

How does siRNA work?

siRNAs consist of two RNA strands, an antisense (or guide) strand and a sense (or passenger) strand, which form a duplex 19 to 25 bp in length with 3' dinucleotide overhangs (Figure 1).

Synthetic siRNAs are most commonly generated through solid-phase chemical synthesis methods (such as patented 2'-ACE chemistry) which provide highly pure, stable, and

readily modified siRNAs. Small double-strand siRNAs are transfected into cells where the guide strand is loaded into RISC. This activated protein and nucleic acid complex can then elicit gene silencing by binding, through perfect complementarity, to a single target mRNA sequence, thereby targeting it for cleavage and degradation.

How is siRNA delivered to a cell?

siRNA must be transfected into cells either by cationic lipid or polymer-based transfection reagents, electroporation (physical delivery via plasma membrane holes created by an electrical field), or adding chemical modifications to the duplex to aid in uptake by the cell.

The success of RNAi experiments depends on the efficiency of gene knockdown. Early work on siRNA design established conventional guidelines for siRNA structural attributes that led to reasonable functional knockdown in specific cases1.

The properties of potent siRNAs were further refined by performing large-scale functional studies that defined thermodynamic and sequence-based rules for rational siRNA design2. These design algorithms greatly improved the reliability of identifying potent siRNA sequences. The Dharmacon SMARTselection algorithm was the first comprehensive rational design strategy applied to commercial collections. While research is continually striving to identify molecules with greater activity and specificity, siRNAs designed by SMARTselection strategies, such as siGENOME and ON-TARGETplus reagents, remain the mo mst effective reagents on thearket.

Although the sequence complementarity-based mechanism underlying RNAi allows for target-specific gene knockdown, the same mechanism can result in unintended knockdown of genes not being directly targeted. Several strategies have been developed to mitigate these so-called "off-target" effects and ensure on-target activity.

Chemical modifications to the siRNA have been used successfully to promote preferential loading of the intended antisense (guide) strand into the RISC complex3,4 and reduce sense (passenger) strand loading and activity5,6. Further, to reduce the risk of the siRNA guide strand seed region from causing off-target effects, design algorithms can incorporate filters that exclude high-frequency seed sequences from known mammalian microRNAs7. Chemical modifications or thermodynamic-based design considerations can also be applied to the siRNA seed region to discourage undesired interactions5,8,9. Finally, the strategy of pooling several independent siRNAs that target an individual gene has been shown to reduce the total number of non-specific gene targets and the frequency of off-target phenotypes while preserving potent target gene knockdown10. All of these strategies, when combined, work efficiently to reduce off-targeting and to achieve potent and specific silencing for a successful RNAi experiment.

siRNAs are widely used to assess the individual contributions of genes to an assortment of cellular phenotypes including cytokinesis11, apoptosis12, insulin signaling13,14 and cell differentiation15.

siRNA screens have been used to identify novel pathways16 and have had significant impact in validating targets for a number of cellular processes and diseases including cancer17,18, HIV infection19 and hepatitis20. Finally, in vivo RNAi has been used for target validation studies in animal disease models and has the potential to be used for therapeutic purposes where disease-causing genes are selectively targeted and suppressed21.

Controls are an essential part of every siRNA experiment. At least three types of controls should be used in each siRNA (and RNAi) experiment: positive control, negative control and untreated control.

A well-characterized positive control allows the researcher to ensure the delivery method is sufficient to achieve effective silencing. Negative controls help to separate sequence-specific effects from the effects of experimental conditions on cellular responses. An untreated control establishes a useful baseline reference for cell phenotypes and gene expression levels. 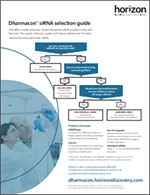 We offer a wide selection of predesigned siRNA product lines and formats. This quick selection guide will help to determine the best option for your particular needs.

Dharmacon siRNA products are the result of scientific innovation in siRNA design and novel modification strategies to optimize potency, specificity and delivery.