CRISPR interference (CRISPRi) is a novel method for specific gene knockdown. It's CRISPR, without the cut.

The CRISPRi system uses a deactivated Cas9 nuclease (dCas9) fused to our proprietary SALL1-SDS3 repressor construct to block transcription of target genes, without cutting the DNA.

Knock down your gene of interest

Find CRISPRi guides for any human gene and dCas9 solutions to meet your needs.

The Dharmacon™ CRISPRmod CRISPRi system requires two components: a specialized dCas9 fused to repressor proteins (SALL1 and SDS3), and a guide RNA specifically designed to target the region immediately downstream of a gene’s transcriptional start site (TSS). The guide associates with dCas9-SALL1-SDS3 and directs the repressor complex to the DNA target site (figure 1).

We offers lentiviral and transient approaches for both repressor protein and guide introduction. 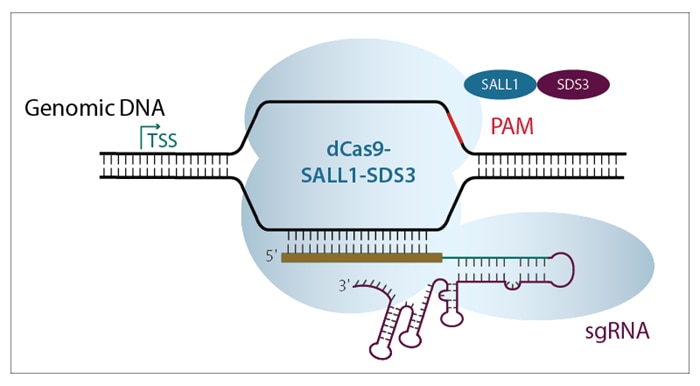 Figure 1. Diagram of dCas9-SALL1-SDS3 with sgRNA targeting the region immediately downstream of a gene’s transcription start site (TSS). The CRISPRi system requires delivery of two components to the cell of interest: dCas9-SALL1-SDS3 protein and a CRISPRi guide RNA.

In the CRISPRi system, the native Cas9 DNA-cutting functionality has been obliterated by point mutations, and the deactivated Cas9 (dCas9) protein has been further engineered for gene repression by fusing Horizon's proprietary SALL1 and SDS3 repressor domains. 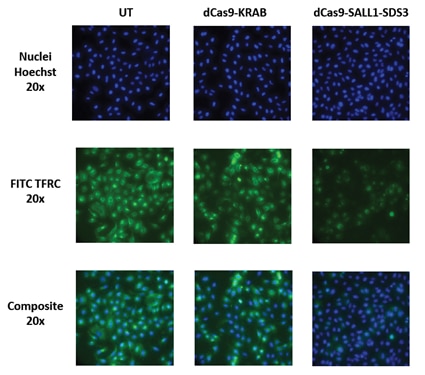 Figure 3. Gene expression levels (log2TPM, Transcripts Per Million) in dCas9-KRAB or dCas9-SALL1-SDS3 stable cells transfected with a pool of three guide RNAs targeting SEL1L for 48 hrs (y axis) compared to expression in cells transfected with non-targeting guide RNA only (x axis). R is Pearson's correlation coefficient, calculated for log transformed values (TPM+1) on all genes except SEL1L. Up-regulated or down-regulated genes with an adjusted p-value < 0.05 and absolute log2 fold change >2 are marked as red and blue, respectively. Differential expression analysis (DESeq) shows minimal off-target gene knockdown with both the dCas9-KRAB and dCas9-SALL1-SDS3 CRISPRi systems. Examination of genomic sequences within 10,000 kb of the target gene and within 1 kb of an off-target guide RNA alignment of up to 4 mismatches indicated the observed differential expression could not be explained by neighborhood effects or nonspecific binding of the guide RNA.

All CRISPRmod guide RNAs are algorithm optimized to maximize specificity and performance, and are available in both synthetic and lentiviral packaged formats.

We are proud to be the first to offer CRISPRi synthetic single-guide RNA (sgRNA). This format enables co-transfection or electroporation with CRISPRi dCas9-SALL1-SDS3 mRNA or introduction into stable dCas9-SALL1-SDS3 expressing cells, and provides the fastest method for obtaining CRISPRi results. With this method, gene repression is evident 24 hours after transfection and persists through 96 hours (figure 4).

Figure 4. CRISPRi synthetic sgRNAs achieve maximal repression at 48-72 hours post-transfection in both dCas9-KRAB and dCas9-SALL1-SDS3-expressing cells.  U2OS cells stably expressing integrated dCas9-KRAB or dCas9-SALL1-SDS3 were plated at 10,000 cells/well and transfected using DharmaFECT 4 Transfection Reagent with pools of pre-designed synthetic sgRNA (25nM) targeting CBX1, HBP1, or SEL1L.  Cells were harvested at 24, 48, 72, 96, 120, and 144 hours post-transfection, total RNA was isolated, and relative gene expression was measured using RT-qPCR. The relative expression of each target gene was calculated with the ∆∆Cq method using GAPDH as the housekeeping gene and normalized to a non-targeting control (NTC).

Pooling is an excellent strategy to drive maximal gene repression and is also beneficial to decrease an experiment’s scale, for example, when performing an analysis of multiple genes in an arrayed plate format.

CRISPRi synthetic sgRNA offers a unique method for the simultaneous knockdown of multiple genes (figure 6). Each guide RNA binds to its specific DNA target independently and relies on exogenously supplied dCas9 fusion protein, thereby minimizing any competition for endogenous pathways. Our scientists have validated the effectiveness of multiplex CRISPRi in iPSC cells.

Figure 6. Individual CRISPRi sgRNAs can be pooled together in a single reagent to achieve enhanced target gene repression or multiplexed to enable the simultaneous repression of multiple genes.  WTC-11 human iPS cells stably expressing integrated dCas9-SALL1-SDS3 were nucleofected with CRISPRi synthetic sgRNA targeting PPIB, SEL1L, and RAB11A via a Lonza 96-well Shuttle system. The most active CRISPRi sgRNA for each gene target was selected and used either individually or as part of a multi-target pool at a concentration of 3 µM per guide. Cells were harvested 72 hours post-nucleofection, total RNA was isolated, and relative gene expression was measured using RT-qPCR. The relative expression for each target gene was calculated with the ∆∆Cq method using ACTB as the housekeeping gene and normalized to a non-targeting control (NTC). Three genes were simultaneously repressed without a substantial decrease in target gene repression or marked changes in cell viability and morphology.

There are many methods to confirm gene repression, including RT-qPCR, Western blots, or immunofluorescence analysis. Typically, the fastest and easiest way to measure the relative change in target gene expression levels between samples treated with a non-targeting control and CRISPRi guide RNAs is RT-qPCR. RT-qPCR analysis works with either the SYBR green method or probe-based gene expression assays. One thing to note when performing RT-qPCR is the gene expression level may drop to a level that is not detectable after CRISPRi treatment. In this case, when using the ∆∆Cq method of analysis, an arbitrary value representing the qPCR instrument’s detection limit is used as a place holder for “non-detectable” as a non-zero value is necessary to perform the calculation. In most cases, this value will be between 35 and 40, depending on the number of programmed cycles and the instrument Cq determination method. Many protocols recommend adding additional cycles (up to 45 total) to standard qPCR cycling conditions.

In our labs, the level of gene knockdown has been shown no correlation with the basal target expression level of each respective gene (figure 7). For example, the gene PPIB is a member of the peptidyl-prolyl cis-trans isomerase (PPIase) family. PPIB is highly expressed in many cell types and is one of the genes that we recommend as a positive control. Here we show relative gene knockdown of a wide range of genes. Interestingly, we see similar transcriptional repression across genes with high or low basal expression levels.

CRISPRi does not depend on endogenous expression levels

Figure 7. CRISPRi transcriptional repression varies by gene but does not appear to be dependent on endogenous expression levels.  Data has been compiled from multiple transfections performed in U2OS cells stably expressing integrated dCas9-SALL1-SDS3 with the following matching conditions.  Cells were plated at 10,000 cells/well and transfected using DharmaFECT 4 Transfection Reagent with CRISPRi synthetic sgRNA pools (25 nM) targeting 21 genes with different basal levels of expression.  Cells were harvested 72 hours post-transfection, total RNA was isolated, and relative gene expression was measured using RT-qPCR.  The relative expression of each target gene was calculated with the ∆∆Cq method using GAPDH as the housekeeping gene and normalized to a non-targeting control (NTC).  The CRISPRi-mediated target gene repression is shown in the left graph where the genes are ordered from low to high level of basal transcript expression.  In the right graph target gene expression is plotted against fragments per kilobase of transcript per million (FPKM), a representation of basal gene expression based on RNA-Seq data from the parental U2OS cell line.  In U2OS cells PPIB is expressed at a basal level roughly one hundredfold greater than that of SOX2, but both genes can be repressed to roughly 20-25 percent of their basal expression with CRISPRmod CRISPRi reagents.

Validated science is good science. Dharmacon Reagents include a wide range of reagents that interrogate cellular pathways, allowing inactivation of a gene at the DNA level, modulating RNA transcription, or by degrading mature mRNA transcripts. We are here to help you choose the best method of gene activation or inactivation for your application. Better yet, choose two methods for robust, elegant, validated science.

CRISPRi presents an ideal opportunity for follow-on studies after RNAi or CRISPRko screening (figure 8). Here we used CRISPRi to follow up on an arrayed siRNA screen we had previously conducted.

Figure 8. Damage Response Assay. h4AX (a constituent of core histone complexes) surrounding double-strand breaks is rapidly phosphorylated, producing a set of responses through the DNA damage signaling network. Knockdown of proteins critical to the DNA damage pathway results in an accumulation of unrepaired double-stranded DNA breaks, and an increase in phosphorylated h4AX (γ-h4AX). Hits from a prior RNAi screen were orthogonally validated using CRISPRi reagents. U2OS cells constitutively expressing dCas9-SALL1-SDS3 under the hEF1α promoter were transfected with pooled sgRNAs (50nM) or ON-TARGETplus SMARTpools (50nM) targeting RPA2, RPA1, or RRM2 using DharmaFECT 4 Transfection Reagent. 72 hours post-transfection, the cells were fixed and stained with an anti-phospho-h4AX antibody, and Hoechst stain was used to identify nuclei. A duplicate plate was harvested, total RNA was isolated, and relative gene expression was measured using RT-qPCR. The relative expression for each target gene was calculated with the ∆∆Cq method using GAPDH as the housekeeping gene and normalized to non-targeting control (NTC).

There are many options and considerations for CRISPRi experimental conditions. Generally, users achieve the most robust knockdown when working with a stable population of dCas9-SALL1-SDS3 cells. For extended timepoint assays (more than 120 hours), many choose lentiviral sgRNA. For short-term assays (less than 120 hours), synthetic sgRNA gives more robust gene repression than expressed guide RNAs.

CRISPRi controls
Positive and non-targeting controls to ensure the optimization of your CRISPRi experimental conditions.

Article – What is CRISPRa and CRISPRi?
CRISPR-Cas9 for gene knockdown and up-regulation