CRISPR activation (CRISPRa) is an optimized method for specific gene overexpression. CRISPRa uses an inactivated CRISPR-Cas9 system (dCas9) to upregulate target genes within their native context. This method offers many advantages over more traditional gene overexpression techniques, such as cDNA and ORF.

Activate your gene of interest

Find CRISPRa guides for any human or mouse gene and dCas9 solutions to meet your needs. 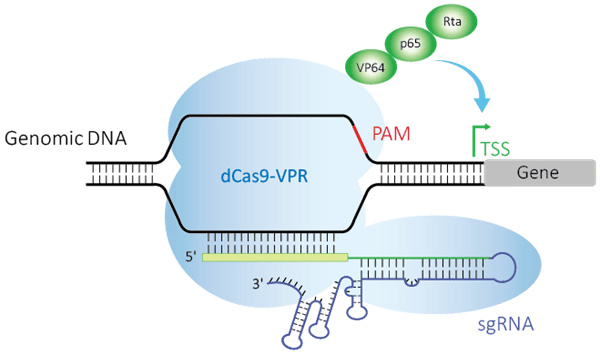 Horizon offers lentiviral and transient approaches for both activator protein and guide introduction.

In CRISPR-Cas9 based CRISPRa systems, the native Cas9 DNA-cutting functionality has been obliterated by point mutations in the RuvCI and HNH nuclease domains. These mutations change the protein to a deactivated, or dead, Cas9 (dCas9). This dCas9 protein is further engineered by fusing various transcriptional activators.

CRISPRa guide RNAs target sequences upstream of the target gene's promoter region or the transcriptional start site (TSS) to result in activation (3,5). Designing functional guide RNAs can be challenging, as TSSs are not always well annotated or inaccessible due to other protein factors. Horizon's CRISPRa guide RNA designs use a published CRISPRa v2 algorithm developed via machine learning techniques (8). The algorithm used FANTOM and Ensembl databases to predict the TSSs and incorporate chromatin, position, and sequence data to predict highly effective guide RNA designs. Additional challenges arise when genes have alternative TSSs (6.8% of genes), and a small number of genes (0.1%) have more than two TSSs. Horizon lists ten guide RNA designs per TSS, ranked in order of predicted functionality.

Horizon's CRISPRa guides are available as either synthetic crRNA or expressed sgRNA formats.

Pooling multiple CRISPRa guide RNA designs has been found to produce either increased gene activation (Figure 2a) or gene activation that is equivalent to the most functional individual crRNA (Figure 2b).

We examined the overlap between the published algorithm designed guide RNAs and found that for most genes (> 70%), there is little to no overlap of the guide RNA target sites. For these genes, we typically see an increase in the level of activation when pooling the gRNAs. Only a small subset of genes (~12%) overlap all four designs at the TSS. For these genes, we have found that the pool typically works similarly to the most effective gRNA. Overall, pooling is an excellent strategy to drive maximal gene activation. Pooling is also beneficial to decrease an experiment's scale, for example, when performing an analysis of multiple genes in an arrayed plate format.

Figure 2. U2OS cells stably expressing integrated dCas9-VPR were plated at 10,000 cells/well and transfected using DharmaFECT 4 Transfection Reagent with CRISPRa synthetic crRNA:tracrRNA (25 nM) targeting EGFR (A) or POU5F1 (B). The pre-designed crRNAs were used either individually or pooled (to a total concentration of 25 nM). Cells were harvested 72 hours post-transfection, and the relative gene expression was calculated using RT-qPCR. Each gene's relative expression was calculated with the ∆∆Cq method using GAPDH as the housekeeping gene and normalized to a non-targeting control.

There are many methods to confirm gene activation, including RT-qPCR, Western blots, or immunofluorescence analysis. Typically, the fastest and easiest way to measure the relative change in target gene expression levels between samples treated with a non-targeting control and CRISPRa guide RNAs is RT-qPCR. RT-qPCR analysis works with either the SYBR green method or probe-based gene expression assays. One thing to note when performing RT-qPCR for gene activation is the gene expression level may be undetectable before CRISPRa. In this case, when using the ∆∆Cq method of analysis, an arbitrary value representing the qPCR instrument's detection limit is used as a place holder for "non-detectable" as a non-zero value is necessary to perform the calculation. In most cases, this value will be between 35 and 40, depending on the number of programmed cycles and the instrument Cq determination method. Many protocols recommend adding additional cycles (up to 45 total) to standard qPCR cycling conditions. An important consideration when designing CRISPRa experiments is that the level of gene activation correlates with the basal target expression level of each respective cell type. Higher activation (100-10,000-fold) may be observed for low basal expression genes, whereas genes that are moderate to highly expressed have lower fold activation (generally less than 100-fold). Before setting out to perform CRISPRa, it is worthwhile to determine your cell line of interest's basal expression level to set expectations on the activation you can achieve. For example, the gene POU5F1 encodes for a transcription factor (OCT4) highly expressed in pluripotent cells like iPSCs but is typically low expressed when cells are differentiated. POU5F1 is one of the genes that we recommend as a positive control, but this would not be a logical choice when working with stem cells. Here we show relative gene activation of POU5F1 in iPSCs (Figure 3A) and a U2OS-dCas9-VPR integrated cell population (a bone osteosarcoma cell line) (Figure 3B). As anticipated, we see low transcriptional activation of POU5F1 in the iPSCs (~1.2 fold) but high transcriptional activation in the bone osteosarcoma cells (~600 fold). 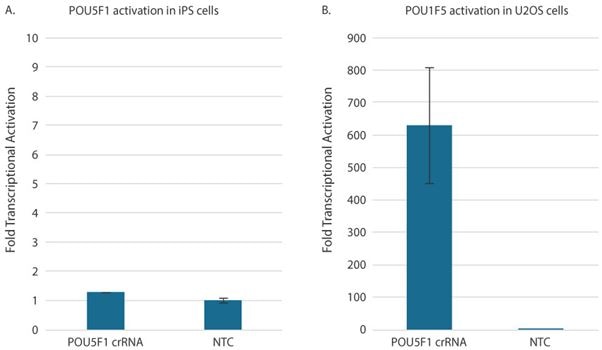 There are many options and considerations for CRISPRa experimental conditions. Generally, users achieve the most robust gene activation when working with a stable population of dCas9-VPR cells. For extended timepoint assays (more than 96 hours), many choose lentiviral sgRNA. For short-term assays (less than 96 hours), synthetic crRNA:tracrRNA or plasmid sgRNA give equivalent gene activation.

We offer several options to use CRISPRa for transcriptional activation.

We offer CRISPRa synthetic crRNA or lentiviral sgRNA predesigned for all human and mouse genes.

CRISPRa synthetic crRNA are supplied as include individual reagents, a set-of-4, or a pool (an equimolar mix of the top four designs). Guides come in tubes or multi-well plates using the Cherry-pick Library Plater. This guide format must be used with synthetic tracrRNA.

CRISPRa lentiviral sgRNA are supplied as individual reagents or a set-of-4, in either purified lentiviral particles or glycerol stocks.

Our predesigned CRISPRa guide RNA offerings represent the top four scoring guide RNA designs from the Horlbeck et al. v2 algorithm. When applicable, an additional four guide RNAs for alternative TSS are labeled as P1 and P2, respectively. If the CRISPRa guide RNA options for your gene have both P1 and P2 designations, it may be beneficial to test both for your experiment. If the CRISPRa guide RNAs for your gene do not have a P1 or P2 label, only a single start site is defined. For the small number of genes with more than two TSS identified, we only offer P1 and P2 as catalog items but can manufacture any guide RNAs based on designs from the published algorithm (8) as a custom request.