Gene overexpression with cDNA or ORFs

Ectopic gene expression is an important tool for gene analysis and protein science, offering insight into gene function at multiple levels. Gain-of-function experiments often result in phenotypic changes which can provide the counterpart to loss-of-function studies, such as gene knockdown.

Gene expression constructs, such as cDNAs and ORFs, are commonly used to over-express a protein of interest to be analyzed for effect on cellular phenotype, intracellular localization, or for the isolation and purification of a protein for further study.

This schematic demonstrates a gene expression construct being translated and expressed in a eukaryotic cell. Once in the nucleus, the cellular machinery recognizes the promoter, transcribes the protein coding sequence into mRNA and translates the protein. The resulting gene product can cause alterations in phenotype, be purified for further processing or to be tracked via localization to better understand protein function.

Pre-cloned cDNAs and ORFs reduce the amount of time needed to clone or synthesize a gene of interest, allowing researchers to spend more time analyzing the results of their over-expression experiment, and less time creating the expression construct itself.

CRISPR activation (CRISPRa) is a new method of gene overexpression that harnesses the cell's native machinery to upregulate target endogenous gene expression levels by up to 10,000x. Learn more about CRISPRa. 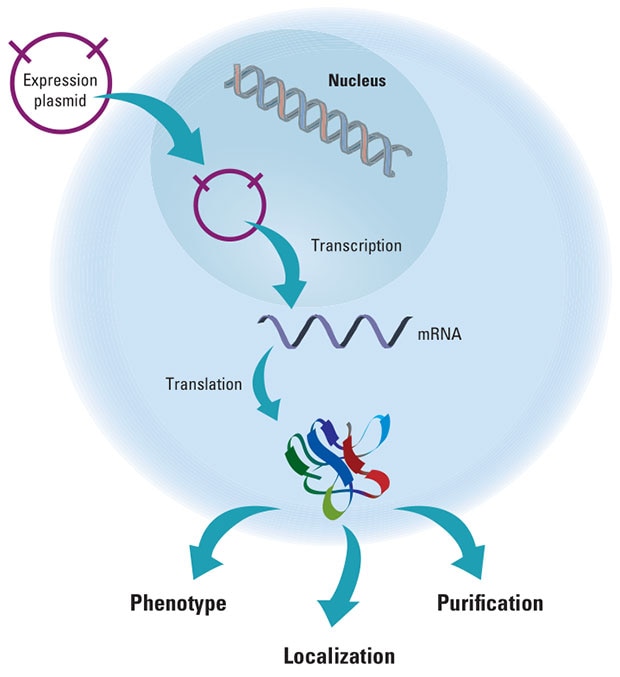 This schematic demonstrates a gene expression construct being translated and expressed in a eukaryotic cell.

cDNAs and ORFs can be used to overexpress particular genes of interest. Choose from individual clones, lentiviral ORFs, and genome-scale libraries.

Derived from mRNA and including 5’ and 3’ UTRs, our cDNA collections are ideal for overexpressing a gene in the context of native regulation.

With both 5’ and 3’ UTRs removed, open reading frames (ORFs) provide a shortcut to protein expression.