We have updated the ordering process to allow all products and services to be purchased with a single PO, please address all POs to Horizon Discovery Biosciences Limited.  For assistance, contact us

A method for uncovering off-target effects

RNAi screens with arrayed siRNA collections are a powerful and popular discovery tool, but are plagued by the endogenous microRNA-like silencing of unintended targets due to activity of the siRNA seed region (nt 2-8 of the antisense strand). In fact, there has been demonstration that introduction of siRNAs without a target sequence can reproduce phenotypes simply through activity of their seed region, and that point mutations within the seed abolished this activity1.

While there are many powerful analytical approaches to determine if a phenotype is real or a seed-based off-target2, 3, there is also a bench-level approach to control for this activity: Seed sibling controls.

What is a seed sibling?

A seed sibling is a siRNA that has no perfect match to transcripts in a species of interest, but whose seed is a perfect match to an experimental siRNA that gives a phenotype (Figure 1). By running a validation study with experimental siRNAs side-by-side with 4-5 of its seed siblings, you can determine if the seed alone is active in initiating a phenotype (since it has no known targets) thereby indicating that the phenotype is likely due to a seed-mediated off-target effect (Figure 2). Alternatively, if the seed siblings do not generate a phenotype, there is good indication that the hit was due to knockdown of the intended target and not a seed-based off-target effect. 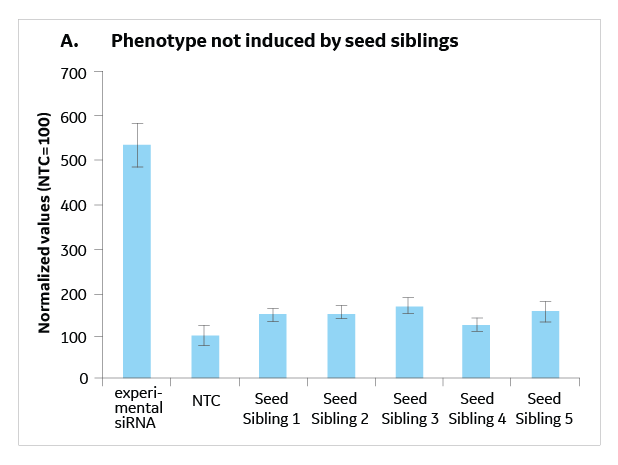 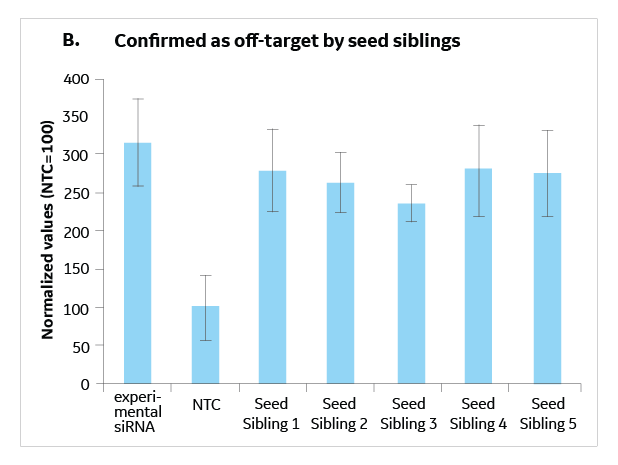 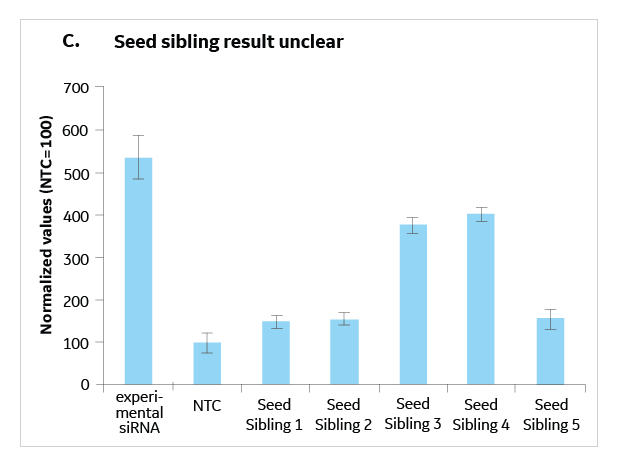 Figure 2. Assay results with experimental siRNAs and seed siblings give strong indication of the phenotype being due to target silencing by the experimental siRNA (A) or the phenotype being due to seed-based off-target effects (B). In some cases, seed sibling controls will not give a clear indication of a seed-based off-target (C), reinforcing the importance of looking at multiple controls and multiple siRNAs per gene.

Obtaining seed sibling control siRNAs can be accomplished with a lookup tool as part of the Dharmacon Cherry-pick Plater. When a researcher provides a list of experimental siRNAs to validate (either a Dharmacon catalog number or the sense/target sequence), the tool will return a list of catalog siRNAs that have the same seed region as the indicated experimental siRNA, but with no perfect match target in the species of interest. See Figure 3 for an example. Since this approach uses existing Dharmacon catalog products, these reagents are immediately available as there is no custom synthesis required.

The selected seed sibling siRNAs can then be automatically loaded into the Cherry-pick Plater to generate an arrayed plate with the desired quantity per well, catalog controls, and plate layout.

Ready to get some seed sibling controls? Go to the Cherry-pick plater and get started! »