The Trans-Lentiviral Packaging System utilizes the most advanced strategy for generating lentiviral particles for transduction of a gene or shRNA of interest. Co-transfection of the Trans-Lentiviral packaging plasmid mix and transfer vector into the packaging cell line, HEK293T, allows efficient production of lentiviral supernatant. Lentiviral particles can deliver genetic content into a wide range of cell types, including both dividing and non-dividing mammalian cells (see Figure 1, Supporting Data tab).

Note: All plasmids are shipped on wet ice and stored at -20°C. For kits containing the packaging cell line, HEK293T, an additional dry ice cooler will be included in the shipment. Upon receipt, the cell line must be stored in liquid nitrogen for two days. 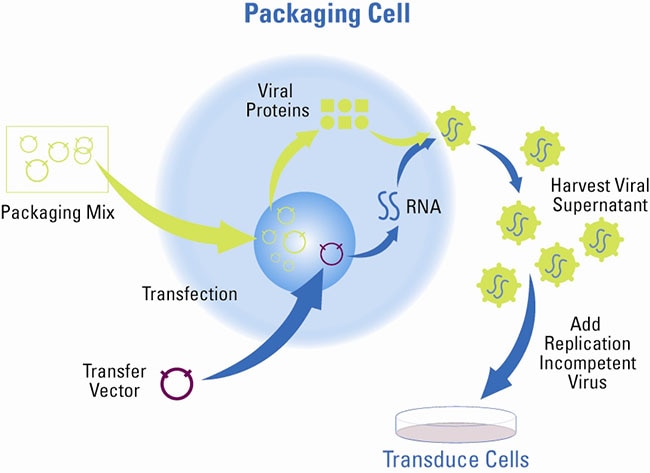 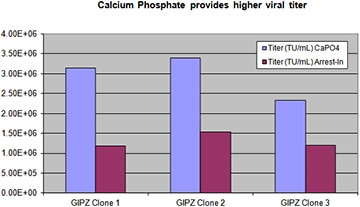 Supernatants were clarified by low-speed centrifugation, aliquoted, and stored at -80 �C. To determine functional titers, HEK293T cells were seeded in a 24-well plate and transduced the following day with a dilution series of each of the viral particles. At 72 hours post-transduction, the transduced cells (TurboGFP-positive) were counted under fluorescence microscopy and titers calculated as transducing units per milliliter (TU/ml). Results indicate that transfection using CaPO4 produced higher titers with all three GIPZ clones as compared to Arrest-In transfection.

The RNAi Consortium, or TRC, is a public-private effort based at the Broad whose mission is to create a shRNA library to enable the scientific community to use RNAi to determine the function of human and mouse genes.