Advantages of base editing for cell therapy

Base editing uses a deaminase enzyme to carry out a transition mutation, converting one base to another specific base, without requiring a DNA double-strand break (DSB) formation. Where use of a cell therapy is not viable, base editing could be deployed as a gene therapy, and could address ~60% of the disease-causing point mutations that make up the majority of human pathogenic mutations. For cell therapy, base editing is an attractive gene engineering platform that can introduce precise edits to correct disease causing transition mutations, or to introduce a stop codon with a high level of efficiency to prevent gene transcription and thereby expression.

The success of cell therapies, in particular CAR T-cells, has been limited to cells that are easy to extract and return to a patient after modification. Tumors involving blood cells, such as leukemia and lymphoma, have been shown excellent response rates to CAR T cells, however, one of the big challenges facing cell therapies for solid tumors is the complexity and immune suppressive nature of the tumor microenvironment. It is likely that gene engineering of the underlying cell will be needed to deliver the required efficacy of the cell therapy in the notoriously immunosuppressive solid tumor environment.

Many genes have already been identified as potential candidates for knockdown or knockout to improve the overall efficacy of CAR T cells and these are being tested in the context of solid tumors, but several genes will need to be modified simultaneously and this is currently a challenging area for cell therapy.

A safety concern of any gene engineering platform is off-target effects. These can be either at regions of the genome with some degree of homology to the target gene or in unrelated regions of the genome and most of these effects arise owing to the generation of DNA double strand breaks. The choice of the guide RNA is critical to managing off-target effects at potential pseudo-genes or other homologous sequences and there are many tools and algorithms available to support the mitigation of this risk. 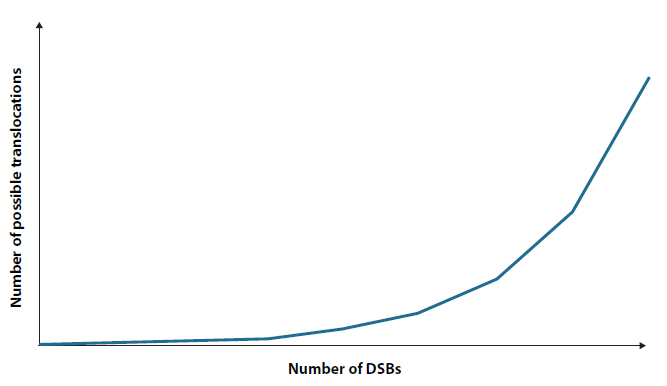 DNA double stand breaks generated by the Cas9 nuclease are repaired by the host cell using a variety of DNA repair pathways. If the DNA is broken in more than one place through the introduction of DSBs in several genes at the same time, the non-homologous end joining (NHEJ) repair pathway could re-join the loose ends incorrectly, leading to chromosomal translocations. While it is likely that this will lead to the death of the cell, there is a risk that the translocation could confer a proliferation or survival advantage to the T-cell potentially leading to a pro-cancerous cell. The unpredictability of these translocations means that even targeting just two genes could lead to unintended consequences. For example, targeting two genes and assuming there were two off-target DSBs would lead to four DSBs and eight DNA ends requiring repair. This means that there are only four correct combinations and 36 erroneous translocations. Increasing the number of genes targeted exacerbates this exponentially.

Base editing relies on Cas9 functioning as a nickase not a nuclease, so this approach should be substantially less likely to result in large genetic alterations, such as translocations. This indicates that base editing could be a tool of choice for multiplex gene knockouts.

The precision of base editing combined with an absence of double strand breaks makes it an ideal candidate for use as a therapeutic gene engineering technology.

Horizon is now open to discuss licensing options of base editing technology to interested partners.

Please read our blog to learn more about base editing technology and relevant peer reviewed publications.