As opposed to pooled formats, an arrayed library format permits single-well analysis using many phenotypic assays - including high-content assays or reporter assays. Edit-R Lentiviral sgRNAs are delivered as plasmids or packaged into lentiviral particles for use with difficult-to-transfect cells.

Schematic map of the plasmid vector elements of the Edit-R Lentiviral sgRNA vector.

In the Edit-R Lentiviral sgRNA vector backbone, the gene-specific crRNA and the tracrRNA are expressed under the control of a human U6 promoter, while expression of the puromycin resistance marker (PuroR) is driven from the mouse CMV promoter and allows for rapid selection of cells with integrated sgRNA. The plasmid contains the AmpR resistance marker for growth and selection in E. coli.

Schematic maps and table of vector elements of the Edit-R Lentiviral Cas9 Nuclease (A) and sgRNA (B) vectors. 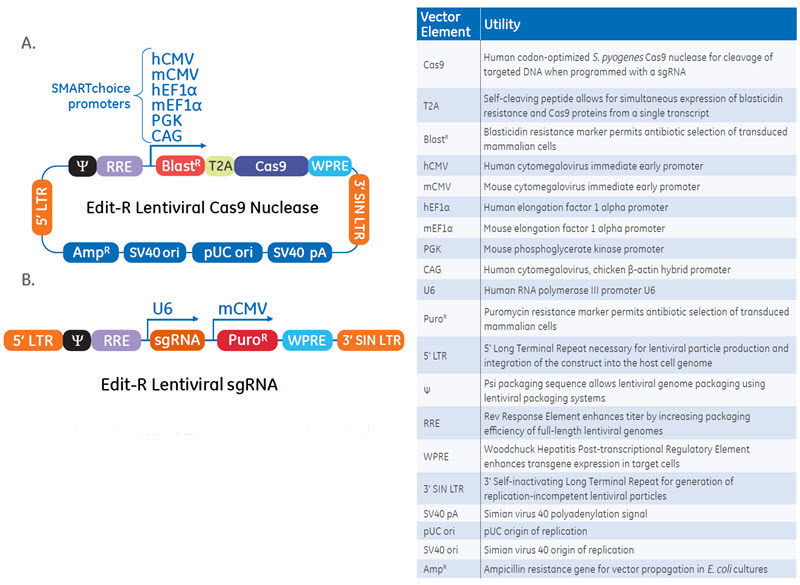 The Edit-R Lentiviral CRISPR-Cas9 platform is a two-vector system that utilizes a lentiviral vector with multiple Pol II promoter options for maximal Cas9 expression and a gene-specific vector for sgRNA expression designed to the target site of interest.

Algorithm applies to both synthetic crRNAs and expressed sgRNAs 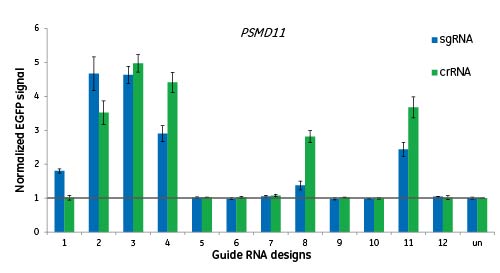 We targeted the gene PSMD11 at 12 different sites and measured functionality by EGFP signal to indicate disruption of the proteasome. Cells were either transfected with crRNA:tracrRNAs, or transduced with lentiviral particles for expression of a sgRNA of the same design. There is no significant difference between the two guide RNA formats when targeting the same genomic site; a good design for crRNA will translate into a good design for sgRNA.