Why researchers are editing in T cells

Gene editing by CRISPR has led to significant advances in immunotherapy development. CRISPR can be used to rapidly knock out cell surface receptors, thereby limiting concerns of rejection by the immune system if the T cells engineered were not collected from the recipient. CRISPR also offers the ability to knock-in specific sequences into any gene, including chimeric antigen receptors (CARs) which target activated T cells to a specific tumor recognition site.

While the promise of using CRISPR to customize editing of immune cells is being realized, performing gene editing in this cell type poses many challenges compared to working with more robust, simpler to edit immortalized cell lines.

T cells can be challenging to grow and maintain compared to immortalized cell lines.

The optimal guide RNA and nuclease delivery conditions for T cells can exist in a narrow window, so extensive optimization is required to achieve reasonable editing efficiency.

Flow cytometry is often the endpoint assay when working with T cells, as it allows researchers to study protein expression in live, intact cells. Assay optimization and validation, including finding the right antibodies and defining the staining parameters, will be required prior to assaying in edited T cells.

Solutions for editing T cells in your lab

The combination of Edit-R predesigned synthetic guide RNA and a DNA-free Cas9 nuclease (either mRNA or protein) achieves highly efficient gene editing and functional knockout in T cells, when delivered in optimal conditions following the tips above. 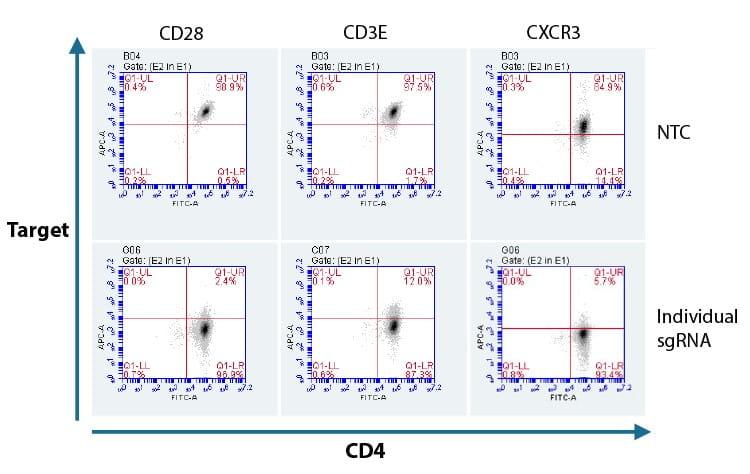 Primary human CD4+ T cells were nucleofected with EGFP-Cas9 mRNA and crRNA:tracrRNA targeting DMNT3B and PPIB or a non-targeting control (NTC). After 72 hours, editing of DMNT3B and PPIB were assessed by NGS analysis compared to NTC treated samples.