Screen 100s or 1000s of genes without the need for costly automation.

Use pooled lentiviral screens to identify genes that regulate cellular responses and signaling pathways, or to discover novel gene functions. Pooled screening libraries can consist of as few as 50 constructs up to many 1000s. In contrast to the costly automated techniques that are required in arrayed screen using individually arrayed reagents, pooled screening libraries allow the researcher to transduce and screen a population of cells within a few tissue culture dishes.

All Horizon pooled lentiviral libraries include:

Assay Development and Optimization: Establish optimal experimental conditions, including those for a) lentiviral transduction and b) screening parameters, such as selective pressure and time between collection of reference and experimental samples.

Primary Screen: A stable population of cells expressing single integrants of constructs is created by transducing lentiviral pools at low MOIs. Transduced cells are then split into reference and experimental populations for application of a selective pressure that induces the phenotype of interest. Genomic DNA (gDNA) is then isolated from reference and experimental populations of transduced cells. Illumina-adapted primers and Phusion Hot-Start II High Fidelity DNA Polymerase are used to PCR amplify integrated construct sequences and add Illumina flow-cell binding sequences. The resulting amplicons are run on Illumina platform sequencers, using the sequencing primers provided.

Hit Identification and Follow-up: Construct sequences are identified in reference and experimental libraries. Constructs that are enriched or depleted during the screen are identified as hits, and the genes that they target are identified. Hits can be confirmed and studied further using individual constructs that can be ordered from the Dharmacon catalog collection. 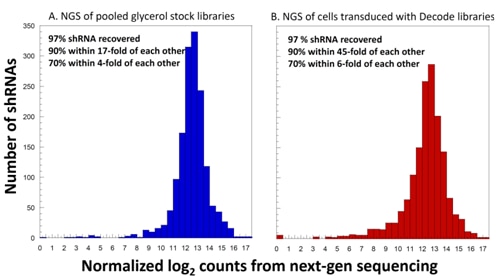 Plasmid DNA was isolated from the Decode Phosphatase glycerol stock pool containing 1561 shRNAs targeting 254 genes (A). Genomic DNA was isolated from HEK293T cells that were transduced with the Decode Phosphatase library at a 1000-fold shRNA representation (B). Both DNA samples were sequenced on an Illumina Hi-Seq to determine the shRNA represented in the samples. Histograms of the normalized log2 counts show that shRNAs recovered after the pooling process (glycerol stock) and after transduction with lentiviral particles are represented with tight distributions. This ensures there is ample representation of each shRNA in the screening experiment.

Critical to the success of your screen and identification of quality hits is performing the screen at a high fold representation (the extent to which any given construct (e.g., shRNA) in a pooled library will be represented in the screen). High construct representation results in a greater degree of reproducibility between biological replicates and ensures that there is a sufficient experimental window for detection of changes in representation after phenotypic selection. 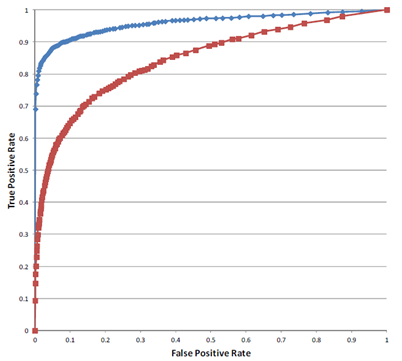 The Receiver Operating Characteristic (ROC) curves for a screen of 10,000 shRNAs at 100- (red) and 500-fold (blue) shRNA representation for detecting two-fold enrichment and depletion. The 500-fold screen has a larger area under the ROC curve and a higher true positive rate than the 100-fold screen, demonstrating the superior ability of the 500-fold screen to detect enriched and depleted shRNAs.

Reproducibility between replicates is maintained through PCR steps by following experimental protocols. 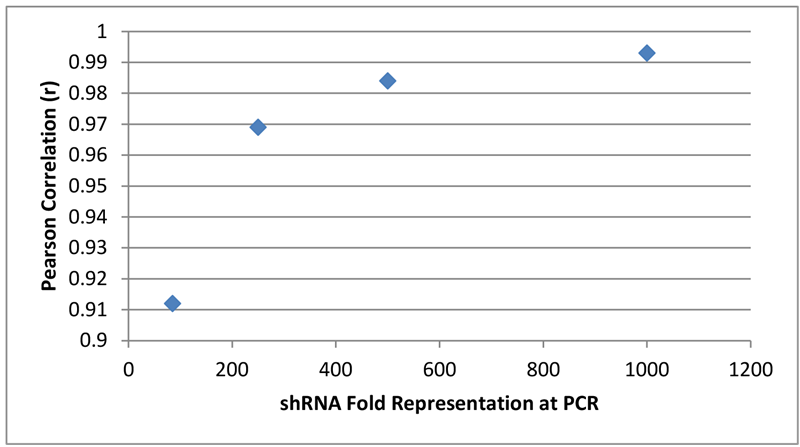 The Decode phosphatase library was transduced into HEK293T cells at 1,000-fold representation. Cells were selected with puromycin for 72 hours and genomic (gDNA) was isolated. Decode PCR primers were used to amplify shRNA sequences at indicated fold representations. Technical replicates of each PCR were compared to determine reproducibility (Pearson Correlation), where 1.0 indicates that the samples are 100% identical.

Each step of the pooled screening workflow, from transduction to hit identification, has been empirically tested. Amplification conditions were identified to ensure uniform amplification and high reproducibility (Strezoska et al. 2012). Dharmacon pooled screening systems includes Illumina-adapted PCR primers for identification of hairpin sequences from gDNA by high-throughput sequencing on Illumina instrumentation. Decode and SMARTvector primer pairs are optimized for efficient amplification of the construct while minimizing thermodynamic bias and variation in representation. In addition, PCR primers have built-in adaptor and index sequences that allow the researcher to easily move from PCR amplification to Illumina high-throughput sequencing. Direct identification of hairpin insert facilitates data analysis and ensures accurate target gene identification. 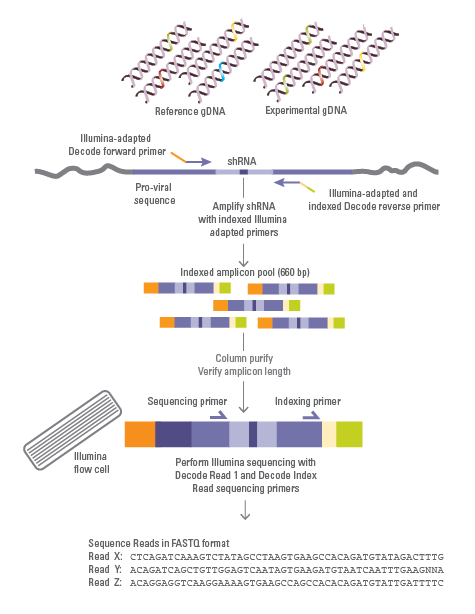 Illumina-adapted primers and Phusion Hot Start II High-Fidelity DNA Polymerase are used to PCR amplify integrated shRNA sequences and add Illumina flow-cell binding sequences. The resulting amplicons are run on Illumina platform sequencers, using the sequencing primers provided. shRNAs that are enriched or depleted during the screen are identified as hits, and the genes that they target are identified. Hits can be confirmed and studied further using individual GIPZ lentiviral shRNAs.

Next-generation sequencing protocol is reproducible so that experimental noise is reduced and hits are more easily identified.

The Decode Phosphatase pooled screening library was transduced into HEK293T cells at 1000-fold shRNA representation. Cells were selected with puromycin for 72 hours and genomic DNA (gDNA) was isolated. Decode PCR and Sequencing primers were used to amplify and sequence gDNA samples as two technical duplicates (blue) and two different transductions (red) and counts analyzed by Illumina high-throughput sequencing. The log2 counts of shRNAs for each of the replicates are plotted against each other.

Create your own custom pool:

Before requesting a quote, download these invaluable tools to carefully plan your pooled lentiviral screen and calculate the amounts of components required:

The pooled lentiviral screening libraries and reagents are solely for internal research use (as set forth in the Product Terms and Conditions) in laboratories where the containment measures stated below and in applicable laws and regulations are met. Products may not be used for diagnostic, therapeutic or other commercial purposes and may not to be administered to humans for any purpose or to animals for therapeutic purposes. All pooled lentiviral screening libraries provided as lentiviral particles are replication-incompetent, self-inactivating (SIN) and non-pathogenic (do not cause infectious human disease).