Development of an algorithm for functional knockout, not just cutting

The role of guide RNAs in CRISPR Cas-9 gene knockout

The S. pyogenes Cas9 nuclease can be programmed by a guide RNA to create double-strand breaks (DSB) at a particular genomic region. Imperfect repair of the DSB can lead to loss of function of the targeted gene. Although most guide RNA target sites result in some level of DNA editing (insertions or deletions), not all result in editing that causes a functional gene disruption or gene knockout. Therefore, it is necessary to consider various factors, including the location of the CRISPR-Cas9 target sequence within the gene, when designing a guide RNA for gene knockout.

To identify criteria for choosing the best functional guide RNA, we developed an algorithm based on functional gene knockout using a phenotypic assay for proteasome function with a GFP readout. The data training set for the algorithm consisted of > 1100 crRNAs targeting 10 genes. We chemically synthesized the crRNAs, rather than cloning and sequencing sgRNAs, to remove any variability in the level of the expressed sgRNAs, and also to save time and cost. The overall results indicate that location of the guide RNA alone is not an indicator for functional gene knockout, and that it is not best practice to design a guide RNA too close to the ATG start site. Figure 1A demonstrates that although guide RNAs in an early exon gave good indel formation, the functional GFP data (Figure 1B; data points in red circle) indicate that these indels did not produce a phenotype in the assay.

Figure 1B is an example of the training data set, in this case, targeting the PSMD8 gene, which illustrates the range of functionality of crRNAs across the entire coding region.

From this training data, we identified many algorithm design rules for choosing the best guide RNAs that include:

Creation of indels does not always result in functional gene knockout 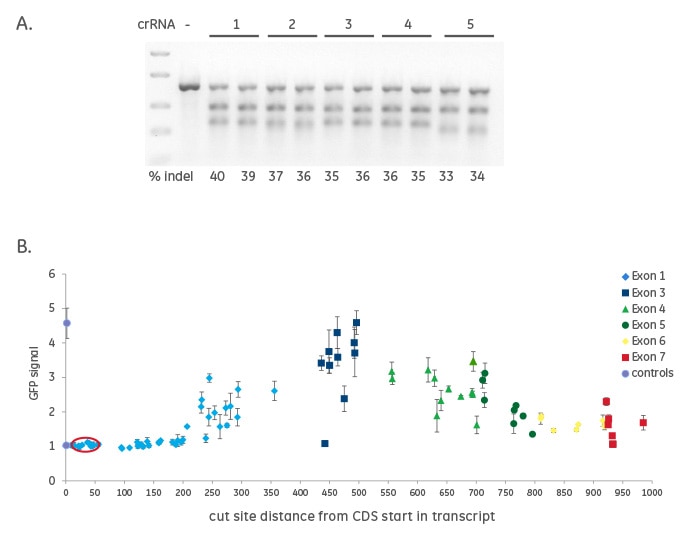 Figure 1. A recombinant U2OS reporter cell line (U2OS Ubi[G76V]-EGFP) that stably expresses Cas9 nuclease was used to determine cutting efficiency and functional protein knockout using crRNAs. This cell line also expresses a mutant ubiquitin fused to EGFP, such that when the proteasome pathway is functional, ubiquitin is degraded and there is no GFP signal. When the proteasome function is disrupted, there is accumulation of GFP and a measurable signal. crRNAs (88) were designed to every NGG PAM sequence spanning the PSMD8 gene, known to be necessary for proteasome function. These crRNAs, along with synthetic tracrRNA (final concentration 50 nM), were transfected into U2OS Ubi[G76V]-EGFP-Cas9 cells and analyzed 3 days post-transfection for gene editing and/or functional gene knockout. A. Five different synthetic crRNAs near the ATG start site in the first exon of PSMD8 [red circle in (B)] were harvested and assessed for CRISPR-Cas9-mediated indel formation with a mismatch detection assay using T7 Endonuclease I. Biological duplicates of each crRNAs were run on a 2% agarose gel and the gene editing efficiency was estimated to ~ 35% indicating that all five crRNAs result in gene editing. B. GFP intensity was measured for all 88 crRNAs. The higher the GFP signal indicates greater protein knockout and higher functionality of the crRNA. Significant variability in GFP intensity was observed for different crRNAs, demonstrating that not all crRNAs result in functional gene knockout, even if there is high efficiency of indel formation (A). These data indicated that an algorithm could be developed and used to choose functional crRNAs, not just for cutting.

To validate the design algorithm, we used next-generation sequencing (NGS) analysis to calculate indel formation. While this does not indicate functional gene knockout, it still requires delivery of the CRISPR-Cas9 reagents, binding to the genomic target site, and cutting and repair of DNA. We also expected to see a difference in indel frequency between the algorithm designed high- and low-scoring crRNAs based on the data training set.

We also validated the algorithm designs using additional phenotypic assays, different from the phenotypic GFP readout used in the training set data. In this example, crRNAs were designed to all PAMs within the open reading frame of three target genes involved in the cellular apoptotic pathway: BCL2L1, PLK1 and WEE1. The crRNAs were divided into two bins based on the algorithm functional score; the bins were designated as the top half scores and the bottom half scores (Figure 2B). These data show that the higher scoring crRNAs resulted in a stronger phenotype than the low-scoring crRNAs, again demonstrating the benefits of using an algorithm to design functional guide RNA. 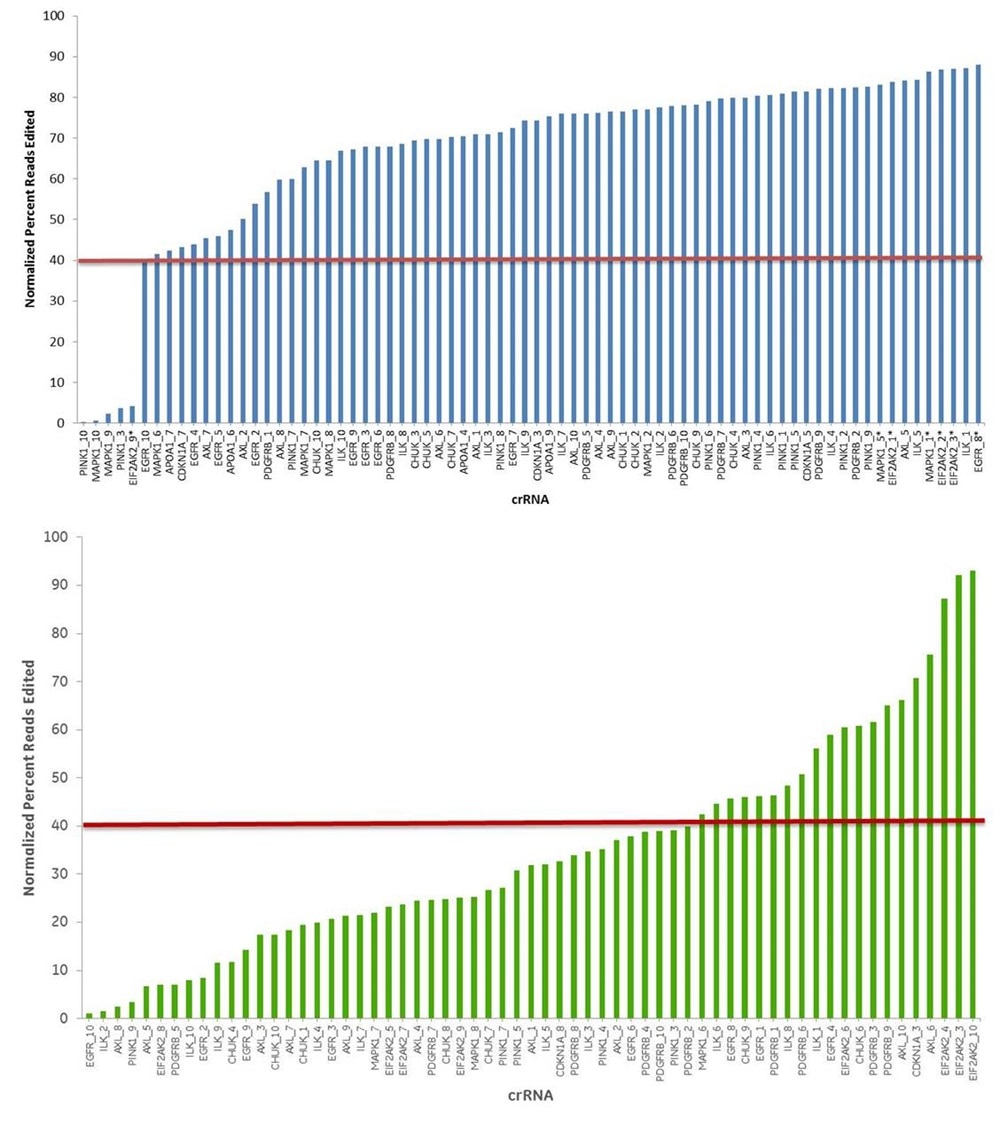 Figure 2. A. crRNAs with high algorithm scores show higher cutting efficiency by NGS analysis. Guide RNAs were designed to ten different genes, each gene having 10 high-scoring and 10 low-scoring crRNAs. HEK293T cells with integrated Cas9 (expressed from a CAG promoter) were transfected separately with synthetic crRNA:tracrRNA (final concentration 50 nM). Three days post-transfection, cells were lysed and amplicons generated for each crRNA target sequence in the gene edited cells as well as untreated cells. These were indexed and pooled for NGS analysis and the percent perfect in gene edited cells were compared to that of untreated cells. Samples were indexed using the Nextera 96-well index kit and pooled for sequencing on a Illumina MiSeq instrument (paired end reads, 2 x 300 length). Reads that passed NGS quality filtering criteria were aligned to the reference file (Bowtie2 v2.1.0). Percent perfect reads were calculated and normalized to the control untransfected samples (Samtools v0.1.12a); the data are presented as normalized percent edited. B. crRNAs with high algorithm scores targeting BCL2L1, PLK1 or WEE1 show stronger phenotype in an ApoONE assay indicating greater functional protein knockout. U2OS Ubi[G76V]-EGFP-Cas9 cells were transfected with synthetic crRNA:tracrRNA (final concentration 25 nM) targeting three genes known to function in the apoptosis pathway. crRNAs were designed to all possible PAM sequences for BCL2L1 (61 crRNAs), PLK1 (37 crRNAs) and WEE1 (12 crRNAs), and were ranked by functional score. The crRNAs were binned into bottom half (h2) and top half (h4) based on their score. An ApoONE assay (Promega, Cat #G7792), which uses caspase genes as markers of apoptosis, was employed as the phenotypic readout. In the box plots shown, the crRNAs with stronger phenotype are indicated by increased values on the y-axis. The data demonstrate that the higher functionality scores correlated nicely with stronger phenotypes due to functional protein knockout.