ON-TARGETplus SMARTpool and individual siRNAs are available as pre-designed, genome-wide reagents for human, mouse, and rat. Simply search for your gene of interest and choose from the available product formats and quantities.

Rat ON-TARGETplus siRNAs were redesigned in 2012 (RefSeq v. 54) to ensure complete genome-wide coverage and update siRNAs that no longer target all known variants. As a result, nearly 5000 new genes have been added to the collection, and over 3000 siRNAs were reversioned to more completely target known gene variants for more efficient knockdown.

Dharmacon scientists and collaborators demonstrated in 2006 (see Reference 1) that siRNA off-targets are mediated by antisense seed-region interactions, initiating the development of a dual-strand modification pattern:

A landmark publication (see Reference 2) from the Dharmacon research group was the first to experimentally demonstrate the key role of the seed region in mediating off-targets. A subsequent 2008 paper (see Reference 3) showed the importance of seed frequency in the 3’UTR as in indicator of its likelihood to cause off-targets. These principles were subsequently applied to our siRNA designs to improve specificity:

ON-TARGETplus siRNA reagents (SMARTpool and three of four individual siRNAs) are guaranteed to silence target gene expression by at least 75% at the mRNA level when demonstrated to have been used under optimal delivery conditions (confirmed using validated positive control and measured at the mRNA level 24 to 48 hours after transfection using 100 nM siRNA).

Note: Most ON-TARGETplus siRNA products are highly functional at 5 to 25 nM working concentration.

Validated positive controls and non-targeting negative controls utilizing patented modifications for optimal specificity. Available as pools or single siRNAs. On-TARGETplus control siRNAs and pools are produced with the patented ON-TARGETplus modification pattern for optimal specificity. They are recommended as controls for any siRNA experiment due to their minimized off-target effects.

Our panel of non-targeting controls permits assessment of potential non-specific effects, to find the optimal negative control for your cell type, and your assay. Pooled siRNA controls are recommended for further reduction of off-targets, and for use with SMARTpool siRNA reagents.

Select a species-specific positive control to silence an expressed housekeeping gene in your experimental cell type. 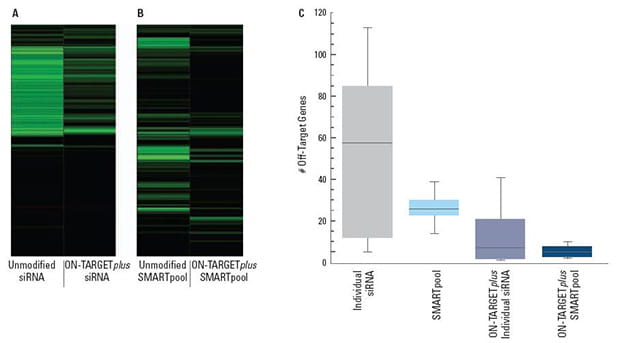 Panels (A) and (B) are representative examples of off-target signatures with and without application of ON-TARGETplus modifications to (A) a single siRNA and (B) a SMARTpool reagent. Green bars indicate genes with 2-fold or more reduction of expression when treated with the indicated siRNA reagent.The ON-TARGETplus modifications reduced the off-targets when compared to unmodified siRNA. Pooling of siRNA and the ON-TARGETplus modification pattern independently, and in combination, provide significant reduction in off-target gene silencing. Panel (C) represents quantitation of off-targets (down-regulated by 2-fold or more) induced by the indicated siRNA reagents targeting 10 different genes (4 siRNAs per gene or a single SMARTpool reagent). Off-targets were quantified using microarray analysis (Agilent) then compiled. Each shaded box represents the middle 50% of the data set. Horizontal line in box: Median value of the data set. Vertical bars: minimum and maximum data values. 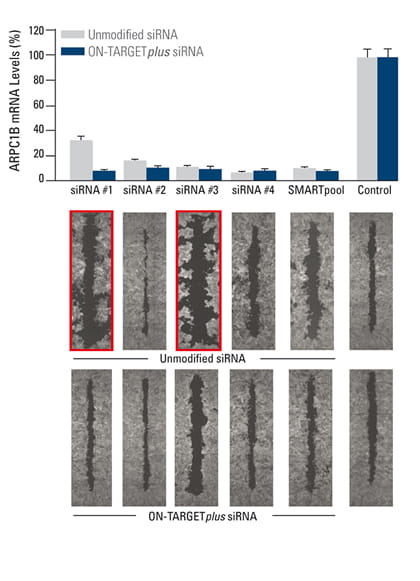 The effect of silencing ARPC1B on cell migration was studied in a breast cancer cell line. A monolayer of cells was uniformly scraped and the rate of cell migration to close the scrape (wound healing) was evaluated. Both unmodified and ON-TARGETplus siRNA reagents induced potent target knockdown. Inconsistent phenotypes due to off-target effects (red outline), were observed for cells transfected with unmodified individual siRNAs. The unmodified SMARTpool improved the false phenotype considerably, while the ON-TARGETplus SMARTpool significantly reduced off-target effects to produce a consistent phenotype. 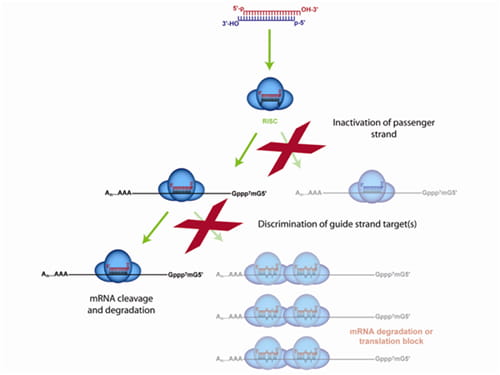 The ON-TARGETplus dual-strand chemical modification begins with the sense (passenger) strand being blocked from RISC uptake to favor antisense (guide) strand loading and reduce passenger strand-induced off-targets. However, the majority of siRNA off-targets are driven by the seed region of the guide strand. ON-TARGETplus is modified within its seed region to destabilize miRNA-like activity and improve specificity to the desired target for potent knockdown. 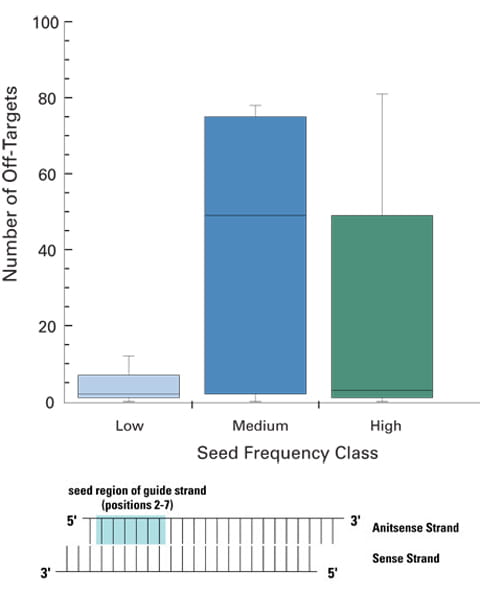 ON-TARGETplus siRNA designs leverage sophisticated bioinformatics to reduce the likelihood of miRNA-like off-targets from high-frequency or highly conserved miRNA seed regions. siRNAs with low seed frequency have a significantly lower number of off-targets than siRNAs with medium or high frequency seeds. Five siRNAs with low, medium, or high frequency seed regions were transfected into HeLa cells and their associated off-target signatures assessed via global expression profiling (Agilent 22K platform). siRNA sequences were constant at positions 1 and 8-19, only the seed regions (positions 2-7) were altered. 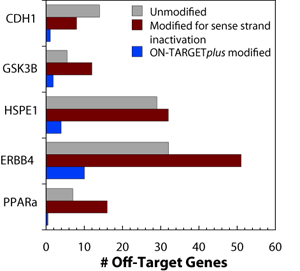