There are no delays on our products or support as a result of COVID-19. If there is a way we can assist you, we are here to help - Contact us or Live chat.

The CRISPR-associated enzyme Cas9 is an RNA-guided endonuclease that requires a guide RNA for genomic DNA target recognition and generation of DNA double-strand breaks (DSB).

DharmaFECT transfection reagents are highly recommended for use with Edit-R™ gene editing reagents and should be purchased separately. Refer to the DharmaFECT Cell Type Guide to find the appropriate formulation for your cell type. 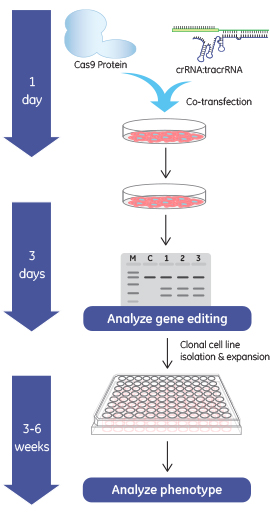 Gene editing with Cas9 Nuclease protein NLS and guide RNA is performed by co-transfecting all components with DharmaFECT Duo Transfection Reagent (or other DharmaFECT transfection reagent suitable to your specific cells of interest). One may then observe phenotypes directly. A DNA mismatch detection assay can be used to estimate gene editing efficiency prior to clonal cell line generation and characterization.

Synthetic crRNA:tracrRNA is compatible with all Cas9 nuclease formats