Ubiquitin is a small regulatory protein found in the majority of eukaryotic tissues and is added to lysine residues of proteins as a post-translational modification.

The addition of ubiquitin can impact on protein regulation in a number of ways including degradation, cellular localization, protein interactions and activity. These modifications can have diverse effects on a number of major cellular processes such as apoptosis, cell cycle, immune regulation and DNA transcription and repair among many others. 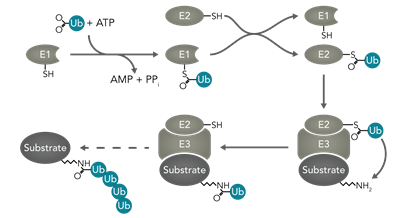 The manner in which ubiquitin is added determines the outcome for the protein. These modifications can include:

These modifications alter cellular process in different ways. For example, monubiquitination can impact on membrane trafficking; however, some forms of polyubquitination can result in a protein being targeted for degradation via the proteasome. The ubiquitin pathway has been implicated in a number of genetic disorders and diseases including cancer and neurological diseases which result from the build-up of protein aggregates such as; Alzheimer’s disease, Parkinson’s disease and Huntingdon’s disease.