To shop for Lincode siRNA Reagents, please select a Gene.

Lincode siRNA reagents are an important tool for the study of long noncoding RNA (lncRNA); an emerging class of regulatory molecules whose roles are still being fully elucidated. The Lincode pre-designed human siRNA reagents benefit from expert siRNA design and proprietary dual-strand modifications for specificity. Simply search for your gene of interest and choose from the available product formats and quantities.

The importance of high-confidence siRNA reagents in lncRNA knockdown studies

lncRNA may be more difficult to silence than protein-coding genes due to:

Non-targeting siRNAs are designed with three or more mismatches to every lncRNA and protein-coding transcript in human, mouse, and rat. GAS5 is a widely expressed lncRNA whose knockdown has been demonstrated in multiple cell lines. If GAS5 expression levels are undetermined in your cell type, the use of ON-TARGETplus positive controls is an alternative method for initial experimental optimization. 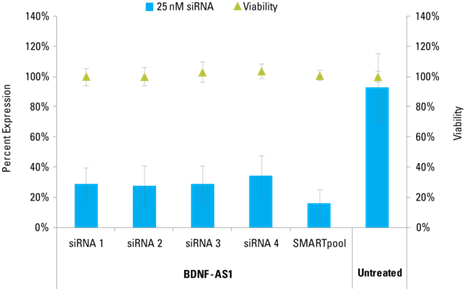 Knockdown of BDNF-AS1 in HeLa cells by Lincode SMARTpool and four siRNAs. All siRNAs were used at 25 nM, normalized and remaining lncRNA transcripts were detected with Solaris (sold under the Thermo Scientific brand) qPCR lncRNA Expression Assays and normalized to Non-targeting Control siRNA. Viability was assessed by resazurin assay. 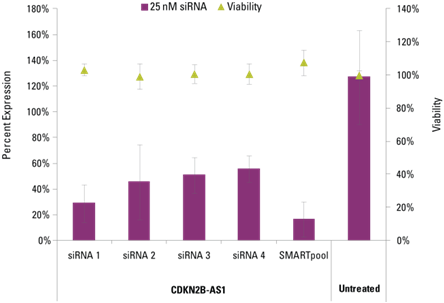 Knockdown of CDKN2B-AS1 in hNDF cells by Lincode SMARTpool and four siRNAs. All siRNAs were used at 25 nM, normalized and remaining lncRNA transcripts were detected with Solaris qPCR lncRNA Expression Assays and normalized to Non-targeting Control siRNA. Viability was assessed by resazurin assay. 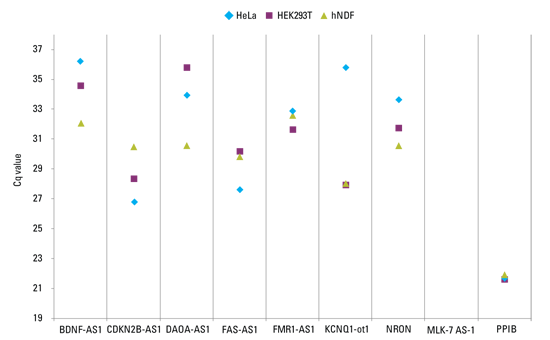 lncRNAs demonstrate lower and more variable expression than protein-coding genes. It is therefore highly recommend to determine lncRNA expression levels in your cells prior to knockdown experiments. Solaris qPCR expression assays are designed for sensitive detection of lncRNA and demonstrate high sensitivity and reproducibility. 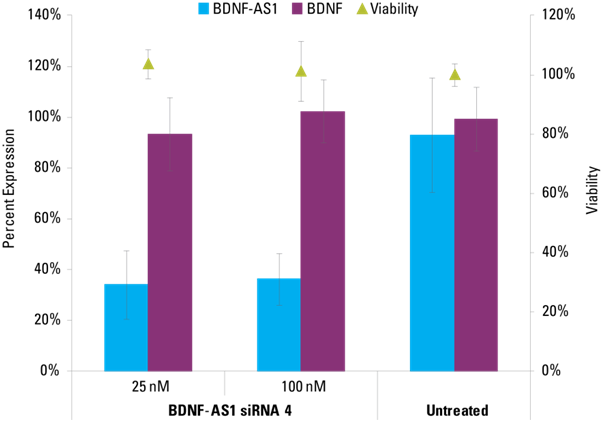 Lincode siRNA effectively knocks down BDNF-AS1 lncRNA, but not the protein-coding transcript BDNF that is antisense to the lncRNA target. This indicates strand specificity of Lincode siRNAs and effectiveness of ON TARGETplus modifications. siRNAs were applied at the indicated concentrations to hNDF cells. BDNF-AS1 and BDNF transcripts were detected with Solaris qPCR Expression Assays and normalized to Non-targeting control siRNA. Viability was assessed by resazurin assay and normalized to Untreated.

To detect subtle phenotypic changes that may arise from lncRNA knockdown, it is essential to incorporate strategies to prevent the off-targeting of protein-coding genes. Lincode siRNA reagents are synthesized with proprietary dual-strand modifications known as the ON-TARGETplus modification pattern which has been proven to reduce off-targets arising from microRNA-like activity of the antisense seed region of the siRNA. 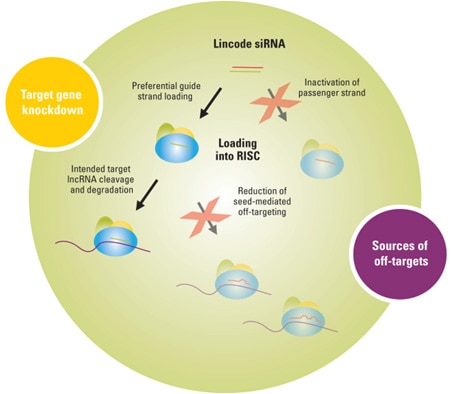 Lincode siRNAs are modified with a proprietary dual-strand modification that improves siRNA functionality. Additionally, off-targets are reduced due to: