Successful microRNA functional studies begin with optimization of the assay in each cell line and/or type of interest. To optimize experimental conditions, we offer both housekeeping and endogenous positive controls for gain-of-function experiments using miRIDIAN Mimics. 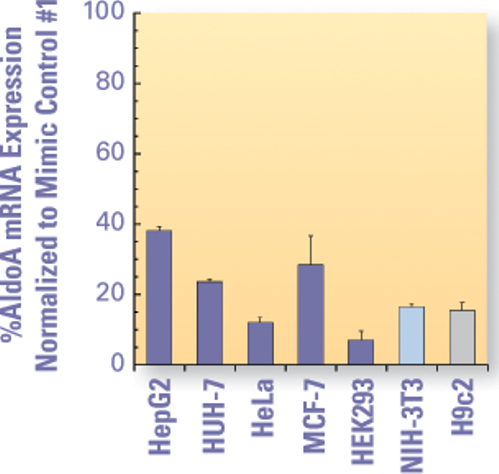 Many cells lines express low to moderate levels of miR-122. Aldolase A is a predicted target of miR-122, and the 3' UTR is conserved in human, mouse, and rat at the 8mer miR-122 predicted seed site. miRIDIAN microRNA Mimics designed to modulate endogenous miR-122 was transfected at 50 nM (Huh-7 at 40 nM) using DharmaFECT 1 into the indicated cell lines and assessed for their ability to decrease AldoA mRNA levels. AldoA down-regulation was determined using the Quantigene® branched DNA assay (Panomics) at 3 days (HepG2 at 5 days) post-transfection.