siGENOME siRNA reagents are widely recognized and trusted for highly efficient target gene silencing. Our scientists were the first to establish siRNA design rules for high potency silencing and continue to drive innovation in this area. By providing genome-wide siRNAs designed with the SMARTselection algorithm, researchers can focus on successful RNAi experiments instead of optimizing siRNA designs for their genes of interest.

siGENOME siRNA is available as pre-designed, genome-wide SMARTpool and individual siRNA reagents for human, mouse and rat. Simply search for your gene of interest and choose from the available product formats and quantities.

In addition to identifying potent siRNA designs with the SMARTselection algorithm, the creation of siGENOME siRNAs also involves:

To retain more high-scoring siRNA designs, the above analysis may trigger the use of a sense strand-blocking modification to ensure only the appropriate strand enters RISC for effective target knockdown (see Figure 2, Supporting Data).

ON-TARGETplus reagents are routinely used at 5 to 25 nM concentration. The calculations below, based on 25 nM, are for estimation purposes only and assume no loss from pipetting.

siGENOME siRNA reagents (SMARTpool and three of four individual siRNAs) are guaranteed to silence target gene expression by at least 75% at the mRNA level when demonstrated to have been used under optimal delivery conditions (confirmed using validated positive control and measured at the mRNA level 24 to 48 hours after transfection using 100 nM siRNA).

Note: Most siGENOME siRNA products are highly functional at 5 to 25 nM working concentration. 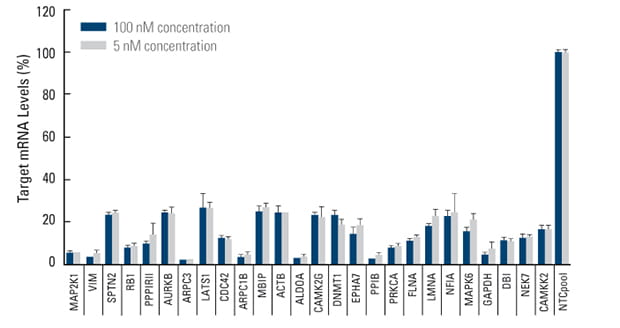 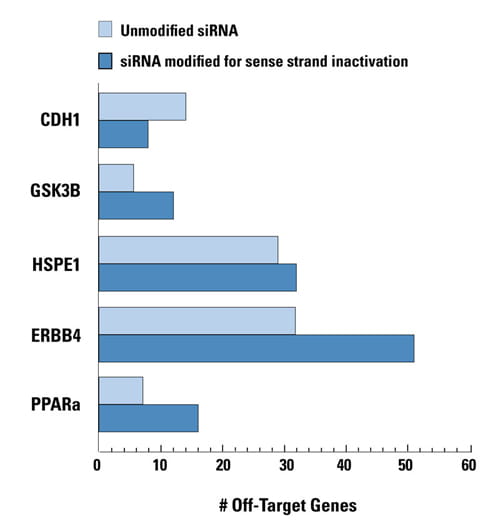 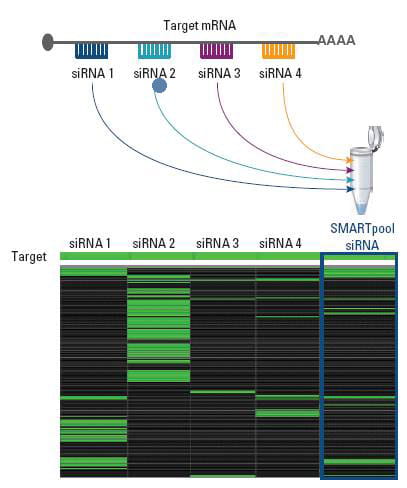 Target gene silencing is maintained while off-target signatures are reduced with a SMARTpool siRNA reagent when compared to its four constituent siRNAs.