Phospholipases are ubiquitously expressed enzymes that control the levels of phospholipid substrates by catalyzing the lysis of phosphorylated lipids. The released lipid molecules then initiate signaling cascades known to regulate cell function.

This complex family is involved in the mechanisms of a number of diseases including cancer and heart disease, and has been implicated in conditions such as brain disorder/injury, kidney and immune cell dysfunction. 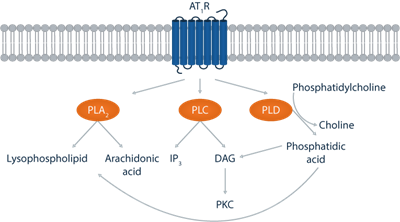 These are identified as PLA, PLB, PLC and PLD, each promoting cleavage at specific ester bonds within phospholipids. Each phospholipase family has several isoforms, which function within specific cell types and are differentially distributed.

The PLA class has members A1 and A2.

PLB cleaves acyl chains from both the sn-1 and sn-2 positions, and so can carry out the reactions of both PLA1 and PLA2.

A wide range of disorders has been associated with PLC genetic aberrations. Mutations in PLCB1 have been linked to a form of epilepsy and changes in the PLCG2 gene are associated with auto-inflammation and antibody deficiency. The development of PLC inhibitors is an active area of research.

There are several isoforms of phospholipase D, and these play a central role in numerous physiological processes, including membrane trafficking, cytoskeletal reorganization, receptor-mediated endocytosis, exocytosis, and cell migration. PLD isoforms has been implicated in the pathophysiology of multiple diseases, in particular the progression of Parkinson’s and Alzheimer’s (PLD3), and various cancers (PLD2).