The future of cell-based immunotherapy: autologous vs allogeneic treatment 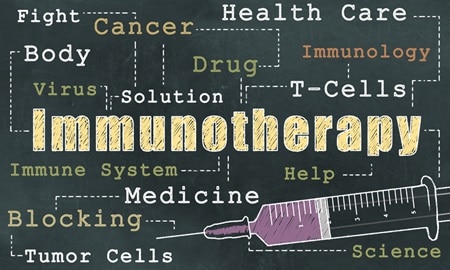 Cell based therapies like Yescarta and Kymriah are generated using the patient's own cells, termed autologous cell therapy. For CAR-T immunotherapy, T cells are harvested from the patient and then shipped to a manufacturing facility where they are genetically modified to express a chimeric antigen receptor that is composed of a single-chain antibody against a target exposed on the surface of the tumor cells, such as CD19, and an engineered transmembrane and intracellular domain to stimulate the cells to expand and kill the target tumor cell. The modified T cells are then expanded in culture, cryopreserved, and shipped back to the patient’s treatment center, where the cells are thawed and re-administered to the patient.

Using the patient’s own T cells reduces the chances of an immunological reaction against the donor’s cells and of graft-versus-host disease (GvHD). The cells also have a chance to persist in the patient’s body for months or years to elicit a long-term response.

However, autologous cell therapy has several major challenges that might render it less favorable as a future therapy for high prevalence diseases.By its very nature, each autologous therapy is unique because it originates from the patient’s own cells. Cancer patients have usually gone through multiple rounds of chemotherapy and drug treatments before becoming eligible for CAR-T cell therapy, therefore quality and counts of the cells to be engineered might be low. Moreover, there is a risk of contamination with malignant cells during manufacture of the CAR-T cells putting the treatment and the patient at risk. Furthermore, as the heterogeneity is large from batch to batch, critical quality attributes (CQAs) are difficult to maintain, and this can reduce the safety and efficacy of the treatment.

Additional challenges include the complex logistics involved in having two clinical procedures per dose (isolation and re-infusion) that have to be well timed and have substantial risk mitigations: cells delivered to the manufacturing center and then back to the clinic are prone to damage, loss, and risk of cross contamination. Time is also a critical factor. The turnaround time from isolating cells from a patient to infusing the modified cells back into the same patient is several weeks and this can be too long for critically ill patients with aggressive disease. Finally, it is difficult to leverage an economy of scale with an individualized treatment, cost of autologous therapies is inevitably high. In an environment of healthcare payers seeking to reduce costs of reimbursement, this is another major hurdle that a service-based business model will have to manage, especially when they are competing with alternative therapies with a lower price tag.

Allogeneic cell therapy (using cells from a donor who is not the patient) offers several advantages compared with autologous cell therapy that makes it an appealing option and aligns well with procedures and operations of pharmaceutical companies. It relies on an “off-the-shelf” product, which means the patient receives cells that originated from a healthy donor genetically engineered to elicit the therapeutic response required and are stored in a cell bank system waiting to be shipped to patients as required. As such, the patient receives the cell treatment on demand straight from the manufacturing facility, which saves precious time, particularly in the context of rapid disease progression. The logistics are also more simple, thus less prone to delays and errors, and as cells originate from healthy donors they are not exposed to prior chemotherapeutic agents and can be pre-selected for quality. Importantly, if the patient requires another treatment, an identical second batch from the same donor can be delivered rapidly. As numerous batches originate from the same donor, there is consistency between the batches. In addition, more complex genetic manipulation can be done in a controlled way with standard quality assurance and the possibility to leverage automation and scale up the manufacturing process. All this contributes to lower cost of goods, which means companies can offer a competitive price compared to alternative treatment options and reimbursements. Allogeneic treatment aligns with the current business model of pharmaceutical companies and maximizes the commercial potential and profit margins.

Although allogeneic immunotherapies have many advantages, there are still major challenges to overcome. The biggest hurdle involves immunological issues that originate from two sources. The first is GvHD where the donor’s T cells attack the recipient cells and cause a life-threatening reaction. The second is rapid elimination of the donor cells before they can elicit their therapeutic action.

A considerable amount of research is devoted to overcoming these challenges. GvHD is caused by the donor cells recognizing proteins on the surface of cells in the patient as targets and killing these cells, thus the T cell receptor on the donor cells needs to be incapacitated. In addition, human leukocyte antigen mismatches between the donor and the patient (alloreactivity) trigger elimination of the donor’s cells. It is expected that multiple genes would need to be knocked out simultaneously to reduce this elimination of donor cells.

CRISPR-Cas9 technology might offer the specificity and multiplex ability needed to knock out (KO) several genes at the same time. Multiple guide RNAs (gRNAs) along with a Cas nuclease can be used to generate double-strand breaks (DSBs), which when repaired by error prone repair pathways introduce insertions and deletions of base pairs that impair gene transcription. However, the risks of this approach are high as multiple DSBs in the genome increase the risk of multiple translocations occurring and adverse events could also be caused by off-target DNA cleavage owing to poor guide selection.

Avoiding DSBs with base editing

Base editing is a novel technology that has emerged in recent years, which can induce KO of specific genes without causing DSBs. This technology is based on the use of an engineered Cas enzyme that does not induce DSB, fused to a deaminase enzyme that chemically alters a specific nucleotide in the DNA sequence of a gene at a precise location. The conversion of bases, for example a C:G changed to a T:A can be used for gene KO by introducing a premature stop codon (for example CAA to TAA) or via disruption of highly conserved splice sites, and consequently impairing gene transcription.

It is too early to predict which approach-allogeneic or autologous cell therapy will dominate the market in the future. However, when analyzing trends in immunotherapy development and acquisition and partnership deals, there is a considerably larger percentage growth in pre-clinical and Phase I development in the allogeneic therapy space. Similar trends appear in large deals and partnerships with allogeneic cell therapy companies. This is not surprising, as the allogeneic approach is better suited for the way pharmaceutical companies manufacture and sell products and is aligned with their present business models. It should be emphasized that ultimately, the safety and efficacy profile of the treatment for a particular indication is the most important consideration. An allogeneic cell therapy that will offer similar safety and efficiency to autologous cell therapy, would make the latter obsolete for that indication. The improvements in the cell therapy space are rapid, and we are excited to be a part of this revolutionary technology for the benefit of patients. Dr. Michael Anbar is a Principal Scientist of the R&D Base Editing team at Horizon Discovery. Since joining the company in January 2020, his work is focused on developing various components of Pin-point™ and enabling the technology to fulfil its commercial potential. Prior to joining Horizon Discovery, he was a Senior Scientist in the Experimental Haematology Laboratory at the Felsenstein Medical Research Center (FMRC) in Israel establishing a novel immunotherapy platform. Prior to FMRC, he spent 3 years at a biotech start-up company leading the efforts for improving the efficiency and production of an engineered multi-enzyme complex for use in large-scale fermentation systems. His post-doctoral research focused on protein engineering of thermostable enzymes.Michael holds a PhD. in Biochemistry and Molecular Biology from the Weizmann Institute of Science.

Have questions? Reach out to our team, we are always happy to help!