To shop for SMARTvector Lentiviral shRNA, please select a Gene.

Because efficient gene silencing depends on both the design and level of expression of the shRNA, it is critical to choose silencing reagents where both the targeting sequence and the specific promoter driving expression are taken into consideration.

SMARTvector Lentiviral shRNAs are designed using our most advanced microRNA-based shRNA-specific rational design algorithm resulting in highly potent and specific targeting sequences. Choose from seven promoters* (human and mouse CMV, human and mouse EF1 alpha, CAG, PGK, and UBC), two fluorescent reporters (TurboGFP and TurboRFP) and a no-fluorescent reporter option to tailor SMARTvector lentiviral shRNAs for your specific cells of interest and your experimental requirements. Up to ten shRNA silencing constructs are predesigned for every gene in human, mouse and rat providing broad coverage across the entire genome.

Unsure which format you need? Learn about our SMARTchoice configuration platform  *Please note that some promoter options may only be available as custom products or upon request.

Together, these attributes greatly enhance the functionality and specificity of lentiviral-mediated RNAi and reduce the toxicity associated with low titer preparations (supernatant).

At Dharmacon, we are committed to delivering high quality lentiviral particle preparations. As such, we clone, package and concentrate each construct with strict QC controls. Due to the inherent complexity of lentiviral particle production and the quality control procedures, turnaround time is estimated to be 4 to 6 weeks. We offer the following formats:

When you purchase a minimum of three SMARTvector lentiviral shRNAs to the same protein-coding gene target using the optimal SMARTchoice promoter for your cell type, at least one of the shRNA constructs will reduce target mRNA levels by 70% or more when used with the vector matched non-targeting control and GAPD or PPIB positive control. Optimal promoters should be determined with the SMARTchoice promoter selection plate. mRNA levels should be measured with RT-qPCR or similar quantitative mRNA analysis no earlier than 72 hours post-transduction. The guarantee only applies to catalog numbers V3S*xxxx and does not apply to any SMARTvector shRNAs targeting lncRNA transcripts.

Functionality of endogenous microRNAs are different 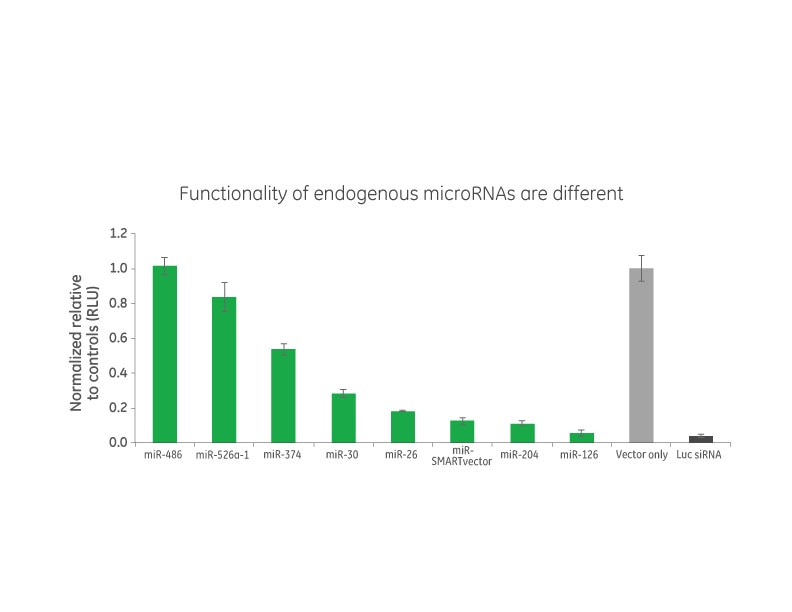 Incorporation of highly functional and appropriately processed microRNA scaffolds into lentiviral silencing constructs greatly enhances the functionality of DNA-based RNAi silencing. Different endogenous human microRNAs were tested in HeLa cells for the ability to silence their respective targets. Each microRNA exhibits a distinctive level of functionality. Several of the constructs (e.g., miR-486 and -526a) exhibited poor levels of activity, silencing their respective reporter constructs less than 20% while native miR-30 and -374 scaffolds provide moderate levels of gene silencing (~50-70%, see above). The scaffold selected as the basis for SMARTvector Lentiviral shRNAs efficiently processed and silenced its’ respective target by 80 to 90%. This highly functional microRNA represents a significant improvement over currently available microRNA-based scaffolds used in RNAi expression platforms.

Functionality of mature and passenger strands of endogenous microRNAs are different 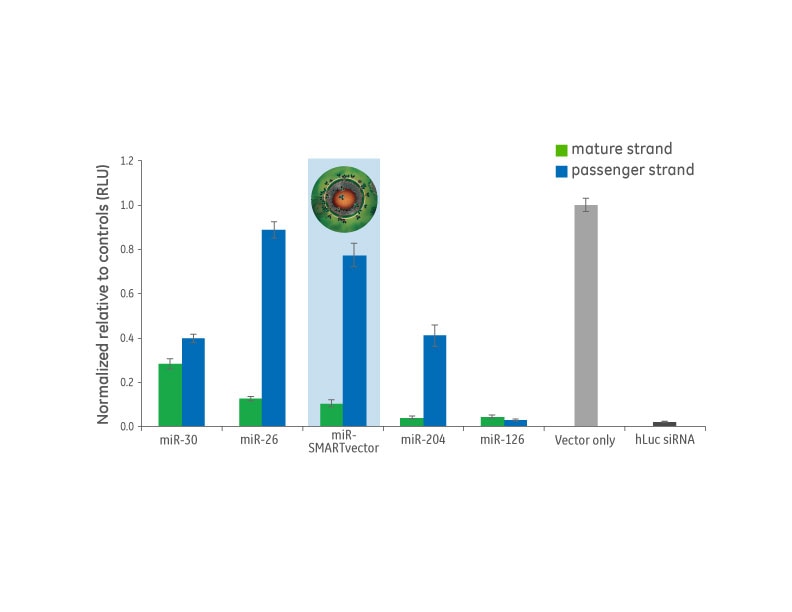 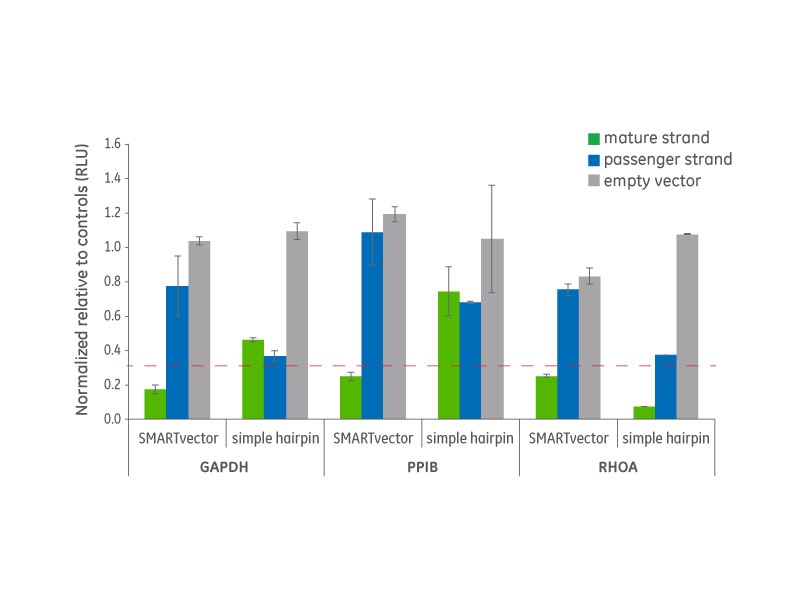 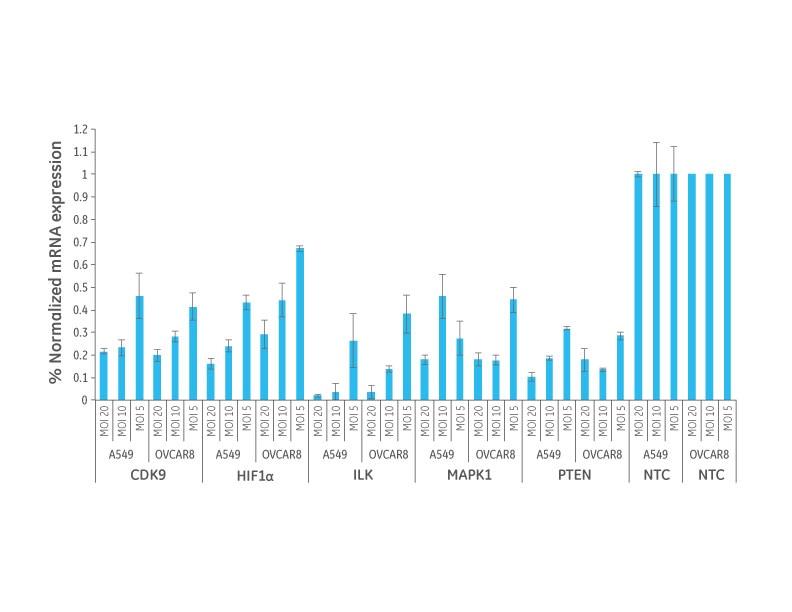 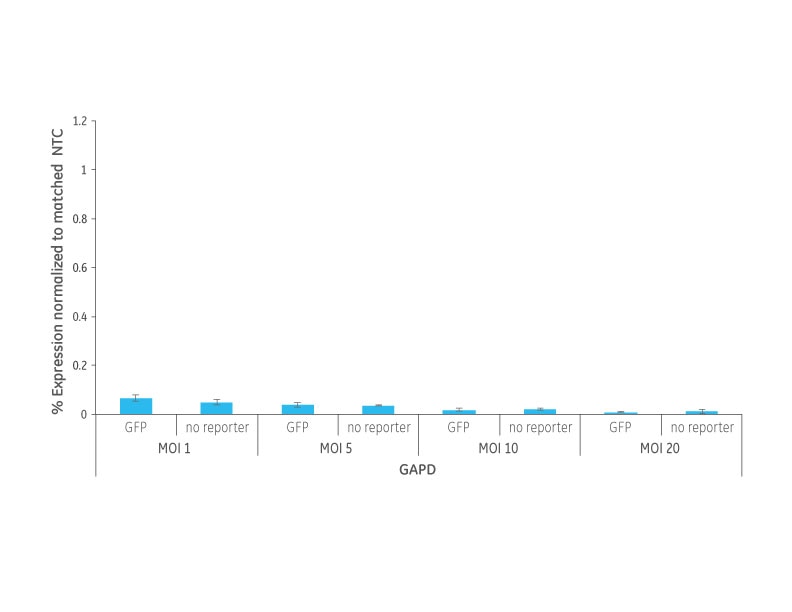 A549 cell lines were transduced with Dharmacon SMARTvector Lentiviral shRNA Particles targeting GAPD with and without a fluorescent reporter at a range of MOIs. mRNA knockdown was assessed 5 days after puromycin selection using QuantiGene branched DNA assay (Panomics, Inc.) and normalized to the matched SMARTvector Non-targeting Control. In all cases, GAPD knockdown is the similar with and without fluorescent reporter.