What is CRISPRa vs CRISPRi?

CRISPR-Cas9 for gene overexpression and down-regulation

The S. pyogenes CRISPR-Cas9 system is commonly used for gene knockout experiments. It consists of a Cas9 nuclease, responsible for creating a DNA double-stranded break (DSB), and guide RNA (gRNA) that is responsible for targeting the nuclease to a specific region in the genome. The cells’ endogenous repair mechanisms can imperfectly repair the DSB and lead to a gene knockout. The CRISPR-Cas9 system has also been adapted to generate technologies called CRISPRi (CRISPR interference) and CRISPRa (CRISPR activation). These utilize nuclease-deactivated Cas9 (dCas9) that cannot generate a DSB (Figure 1A), but instead target genomic regions resulting in RNA-directed transcriptional control. CRISPRi1,2 utilizes dCas9 with or without a KRAB effector domain that complexes with gRNA to target promoter regions for transcriptional repression, or knockdown, of the gene. CRISPRa3-8 employs dCas9 fused to different transcriptional activation domains, which can be directed to promoter regions by either standard S. pyogenes gRNA or special gRNAs that recruit additional transcriptional activation domains to upregulate expression of the target gene (Figure 1B).

CRISPRi or CRISPRa requires sgRNA designs in proximity to the gene’s promoter region or the transcriptional start site to result in silencing or activation, respectively.4,6Designing functional gRNAs can be challenging, as transcriptional start sites are not always well annotated or may be inaccessible due to presence of other protein factors, and cryptic or alternative promoters may be utilized. However, systematic manipulation of gene expression at genome scale utilizing pooled sgRNA screening has enabled development of design algorithms with improved gRNA functionality for CRISPRi and CRISPRa.9 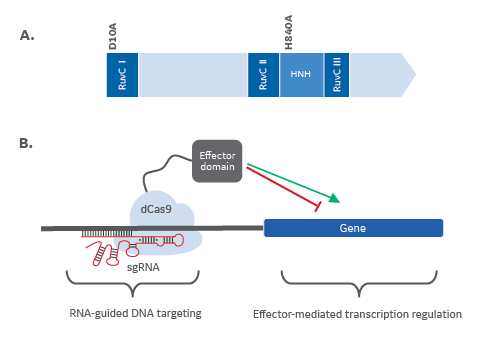 Figure 1.
A. CRISPRi and CRISPRa use deactivated or “dead” Cas9 (dCas9), a nuclease-deficient mutant variant of the Cas9 protein. The schematic of dCas9 shows two point mutations (D10A, H840A) that inactivate the DNA cleavage activity. B. CRISPRi and CRISPRa technologies essentially generate artificial transcription factors by attaching an effector domain to dCas9 to silence or activate transcription.

Dharmacon CRISPRa products utilize the dCas9-VPR activation system7, and guide RNAs based on a published CRISPR algorithm9. Predesigned guide RNAs for human and mouse protein coding genes can be ordered on the Dharmacon website by simply searching for the gene of interest and choosing your preferred format (expressed sgRNA or synthetic crRNA). Alternatively, custom self-designed S. pyogenes guide RNA for CRISPRi and CRISPRa systems can be ordered through the CRISPR Design Tool using rules defined in the literature*.4,8 9

When should I use CRISPRi and CRISPRa?