Considerations for setting up RT-qPCR experiments for gene expression studies

Quantitative RT-PCR (qPCR) experiments enable precise and quantitative measurements of gene expression. In the context of mRNA expression experiments, qPCR is often used to quantify changes in relative expression levels between an experimental sample versus a reference sample. Those changes in expression are commonly reported in percent relative to the reference sample, for example to quantify siRNA-mediated mRNA knockdown relative to a non-targeting negative control. (see tech note: Demonstration of a ΔΔCq Calculation Method to Compute Relative Gene Expression from qPCR Data).

In this article, we will focus on the experimental setup, controls as well as validation of results to ensure obtaining reliable mRNA expression data from qPCR experiments.

Setting up your qPCR experiment

qPCR relies either on DNA intercalating dyes, or probe-based detection methods to measure amplification of reaction products in real time. Probe-based gene expression assays have the advantage of using a sequence-specific probe to enhance specificity and to deliver reliable results.

No matter which detection chemistry you choose, obtaining reliable results depends on knowing your gene, its related transcript variants and SNP locations. PCR primers should be specific and detect all transcripts of interest. In addition, designing exon spanning primers can limit the potential co-amplification of gDNA impurities.

Integrity. Sample integrity is critical for obtaining accurate and consistent qPCR results. To inactivate or remove nucleases, workplaces and tools should be regularly decontaminated from potential RNAses. As for any RNA work, gloves should be worn always, and the use of RNAse-free plastics is recommended. Nuclease inhibitors can be used however they will usually only be effective on some subtypes of nucleases. RNA should be stored at -20/-80°C.

Purity. Sample purity is also critical for reliable data. PCR inhibitors should be avoided during all steps of sample preparation. It is of equal importance to make sure no contaminants are present. To prevent gDNA amplification, RNA samples may be treated with either DNAse or Uracil-DNA glycosylase (if dUTP is used for setting up PCR reactions), and primers may be designed to span exon-exon junctions.

For obtaining reliable results, it is advisable to include multiple controls and replicates (see figure 1). 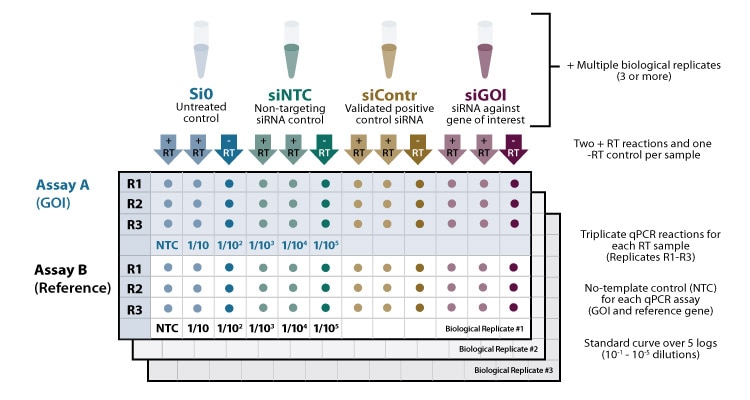 Figure 1. Example for a 96well qPCR layout following an RNAi experiment, including multiple technical and biological replicates and controls. + RT/ -RT: Reactions with and without reverse transcriptase. Assay A (upper panel): qPCR reactions containing primer set A for quantifying the gene of interest (GOI). Assay B (lower panel): qPCR reactions containing primer set B for quantifying the endogenous reference gene.

No template control. For each gene, a qPCR reaction is set up without cDNA to detect any cross-contamination in the reagents or primers.

The expression of the endogenous reference gene should remain unaltered under the conditions and timepoints tested, and be of similar expression level to the experiment’s gene of interest. Testing a large panel of reference genes allows selecting the one that shows the least variation in Cq values (measured as standard deviation) across all tested conditions.

Housekeeping genes such as GAPDH, PPIB, Lamin A/C or ACTB are typically expressed at constant levels, however this is not always the case. Hence, they still need to be tested for variability in expression before using them as endogenous controls.

If there is no single reference gene stably expressed under the conditions tested, using several reference genes in parallel is a well-documented approach.

Standard curves should be performed for any set of qPCR primers as they allow conclusions about the linear range, limit of detection, repeatability and efficiency of an assay. The standard curve is commonly generated using a 10-fold dilution series of at least 5 different standard concentrations in triplicate. All Cq values should fall within the linear range of the standard curve, hence for reliable results, choose Cq values between 15 and 30: Too high target concentrations can have such low Cq values that baseline subtraction becomes difficult- dilution of the sample will enable more accurate measurements. Too low target concentrations that lie below the limit of detection should likewise be excluded from analysis.

It is recommended to determine the PCR efficiencies for each primer/probe assay. The PCR efficiencies of the target gene and endogenous reference gene should be comparable, for accurate estimation of relative gene expression levels using the ΔΔCq method.

The amplification efficiency will depend on the gene-specific assay, the performance of reaction components, and template quality. To calculate the efficiency of the real-time PCR, the slope of the standard curve can be used. For a PCR efficiency of 100%, the slope of the standard curve would be around -3.3. The correlation coefficient R2 of the curve should be > 0.99 to provide a good confidence.

LOD refers to the minimum quantity of target that can be detected above the background noise of the system. If your gene is expressed at low levels, you may want to check the limit of detection of your assay experimentally, to be sure what you detect is your true target and not just some background noise.

In addition to in silico tools like primer BLAST for checking the specificity of PCR primers, a melt curve analysis can be performed to make sure there is only 1 amplification product detected when using SYBR-based primers. Amplification products can be run on an agarose gel to make sure the amplicon size matches the in silico predictions. Probe-based designs use a sequence-specific probe to further enhance specificity.

qPCR is a powerful technique to study changes in the expression of genes. Appropriate controls and validation experiments should be put in place for each gene being studied. Using the guidelines above will help you achieve robust and reproducible results for your experiments.