Cellular delivery of both guide RNA and Cas9 nuclease is required for gene editing with the CRISPR-Cas9 system. Depending on the type of guide RNA used, this exogenous RNA can cause unwanted effects, such as an immune response, and interfere with experimental observations. The mammalian innate immune system recognizes whether RNA is from itself or foreign invaders (bacteria, fungi, viruses). If a cell identifies RNA as foreign, it mounts an immune response that can result in cell death. Different immune response pathway proteins are responsible for recognition of RNA characteristics: single-stranded RNA, double-stranded RNA, triphosphates on the end of single-stranded RNA, and even the length of the RNA.1,2

Guide RNA can be enzymatically or chemically synthesized

In vitro transcribed single guide RNA (sgRNA) is generated enzymatically using a DNA template, ribonucleoside triphosphates and a bacteriophage RNA polymerase, most commonly T7.3 After transcription, a 5’ triphosphate remains on the RNA which requires removal by a phosphatase enzyme. Finally, RNA must be purified from unincorporated triphosphates, protein and DNA. While labor-intensive, enzymatic synthesis can be performed in most laboratories and is cost-effective.4

Both crRNA:tracrRNA and sgRNA can be generated by chemical synthesis, which builds RNA using nucleoside phosphoramidites on a solid support. This is followed by cleavage from the support, deprotection, and desalting to remove impurities (reviewed in Kelley, 2016)5. Automated solid-phase RNA synthesis can generate RNA of different lengths and sequences, and it enables the addition of chemical modifications in specific locations.

To measure whether different formats of guide RNA cause unwanted effects, we performed an experiment where editing efficiency, viability, and up-regulation of immune response genes were monitored following delivery for several types of guide RNA (Table 1). For the chemically synthesized guide RNAs, we utilized similar chemical modification approaches to those described previously for siRNAs, antisense RNAs, and guide RNAs6-8. Chemical modifications included phosphorothioate on the RNA backbone and 2’-O-methyl on the sugar to improve the nuclease stability of the guide RNA. 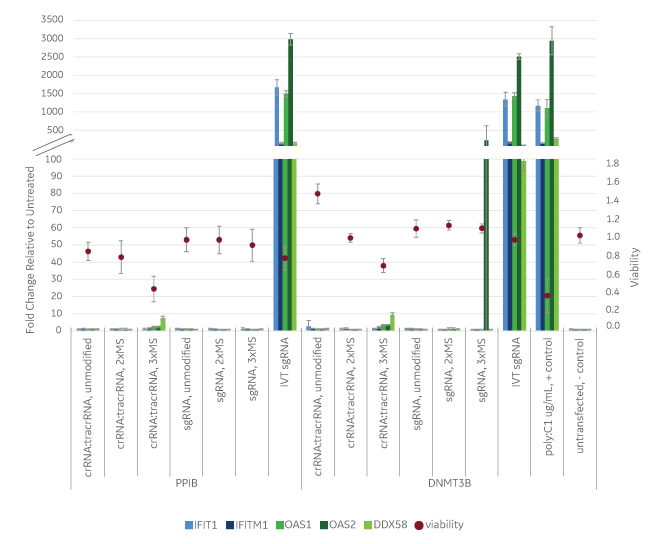 Figure 1. A HEK293T Cas9 nuclease expressing cell line was transfected with different synthetic guide RNA formats including unmodified crRNA:tracrRNA, crRNA:tracrRNA modified with 2xMS on 5’ crRNA and 3’ tracrRNA, crRNA:tracrRNA modified with 3xMS on both 5’ and 3’ crRNA and tracrRNA, unmodified synthetic sgRNA, modified synthetic sgRNA with 5’ and 3’ 2xMS or 3xMS, and in vitro transcribed (IVT) sgRNA targeting PPIB and DNMT3B genes. At 72 hours viability was assessed with the Resazurin reduction assay (red dots) and the levels of five immune response genes were quantified by RT-qPCR. MS = 2’-O-methyl nucleotides and phosphorothioate backbone linkages.

These results are consistent with previous observations in the RNA field where cell death and an activation of the immune response can occur in some cell types due to incomplete removal of 5’ triphosphates from an in vitrotranscribed RNA9 or due to remaining impurities from the reactions. For the modifications on the chemically synthesized RNAs, it is known that some modifications can actually help RNA evade the innate immune system while other modifications can lead to cellular toxicity.6,8 Therefore, it is important to use modifications that improve characteristics of the molecule while not inducing responses that can complicate experimental outcome and interfere with phenotypic observations. Both Edit-R crRNA:tracrRNA and Edit-R sgRNA utilize chemical modifications that ensure good function (via increased nuclease resistance in some delivery modalities) without unwanted effects.