Biosafety tip: Proving there is no lentivirus left in your cell culture

When packaging lentiviral particles, one question we sometimes receive is: How do I confirm that no spontaneous recombination occurred, or that there is no further formation of replication-competent retrovirus (RCR) released to the culture medium after transduction of cells?


This is a very important question, as it has to do with the biosafety of working with lentiviral vectors, especially because they are known to have the potential to integrate into mammalian genomes and possibly cause cancer related diseases (1,2). To decrease the risk of generating RCR, several strategies were used in the design of our lentiviral plasmids and packaging systems. First, the transfer vector is minimized to contain only the essential elements from the lentiviral genome. In addition, those retained viral regions are further altered (eg: 3’LTR region) to produce self-inactivating lentiviral particles. Additional biosafety features were applied to the packaging system: The gag-pro viral packaging components were split across several plasmids and homology between components was strictly analyzed and avoided, minimizing the probability of spontaneous recombination events. Also, the packaging plasmids allow the expression in trans of proteins required to produce viral progeny, but, as these vectors do not contain LTRs or ψ packaging signal, no new replication-competent virus can be produced (3-6).

To interrogate the presence of RCRs in the supernatants of transduced cells, it is best to follow the FDA’s recommendations (7). These include taking at least 5% of the total supernatant after transduction, and applying it to a permissive cell line. Amplification of RCRs can then be detected by colony formation assay. To do this, we have a crystal violet protocol that can help you. Colonies caused by RCR should be visible by eye, as shown in the figure below. 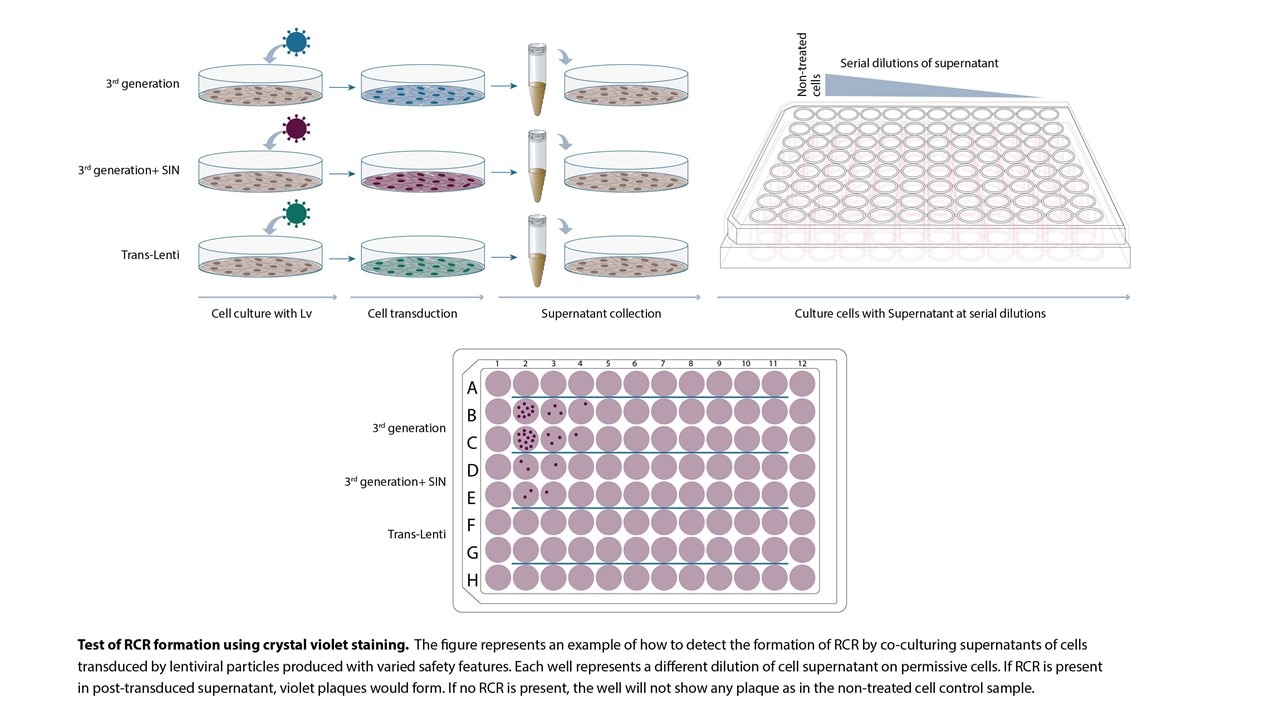 An alternative way to detect the formation of new RCR is to measure by qPCR. This method meets many challenges, as recombinant RCR could have a mix of viral and cellular components, and it is not known if the RCR is a slow or rapid grower. One option proposed is to measure by qPCR the VSV-G gene, as this is present in most packaging systems (8). While this method requires optimization of the qPCR conditions and establishing the limit of detection of the technique, it is a method that is also accepted by the FDA as a faster method to determine the formation of RCR.

In summary, when using lentiviral vectors (especially if they are going to be used in gene therapy applications) it is necessary to avoid spontaneous recombination, so unintended viral replication does not occur. One way to provide increased confidence working with lentiviral vectors is to use packaging mixes with the most advanced safety features, such as fourth generation products like our Trans-Lentiviral Packaging Systems. Additionally, it may be desired to investigate the formation of RCR/L particles through several studies to show a very low likelihood of RCR formation (9, 10), as described in the post above.

Ivonne has been part of the scientific support team since August 2013. With several years of hands-on experience in the lab and a broad scientific background, she loves assisting customers with their scientific questions-- especially about different strategies in gene modulation or CRISPR based studies.