We have updated the ordering process to allow all products and services to be purchased with a single PO, please address all POs to Horizon Discovery Biosciences Limited.  For assistance, contact us

CRISPR activation (CRISPRa) is based on the CRISPR-Cas9 system which requires two components to be delivered and/or expressed in the cell for efficient transcriptional activation: a guide RNA and a nuclease-deactivated Cas9 (dCas9) fused to transcriptional activators, such as dCas9-VPR. Insufficient amounts of either component will result in inefficient target gene expression.

mRNA and protein levels may change to different degrees and with different timing in CRISPRa experiments; this should be taken into consideration when detecting expression levels.

Non-targeting (negative) controls are designed to target no annotated genomic region; therefore, the baseline expression of any given gene should not be altered, and any non-specific effects can be observed.

Controls should be used for: 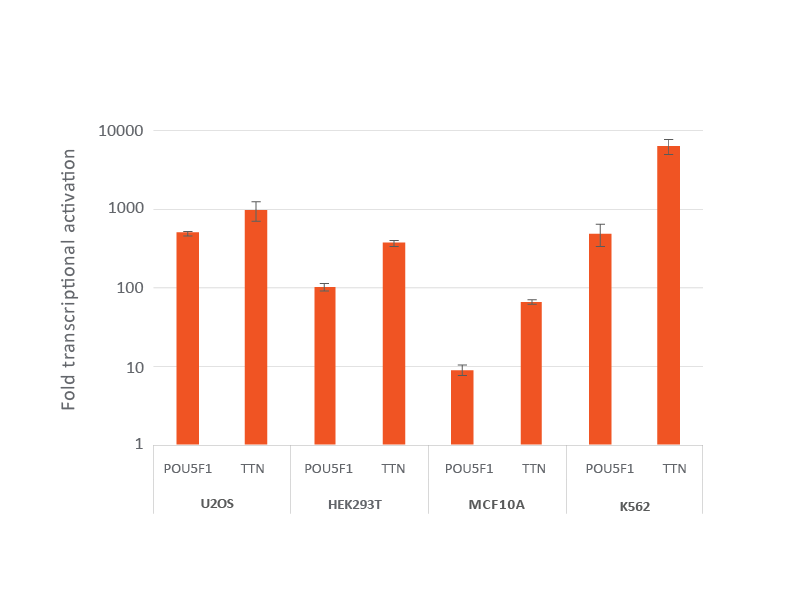 U2OS, HEK293T, MCF 10A and K562 stably expressing integrated dCas9-VPR were plated at 10,000 cells/well and transduced with sgRNA lentiviral particles targeting POU5F1 or TTN at a MOI of 0.3 to obtain cells with a single integrant. Cells were selected with 2 µg/mL puromycin for 4 days prior to analysis with RT-qPCR. The relative expression of each gene was calculated with the ΔΔCq method using GAPDH as the housekeeping gene and normalized to a non-targeting control.