Learn how to derive the equations behind mismatch detection assays

We recently wrote a featured article describing assessment of gene editing with DNA mismatch detection assays where we explain the relationship between percent editing and percent cleavage. For many, this is a non-intuitive result, but it is easy to understand after examining the derivation of Eq. 1. The underlying mathematics also reveals several fundamental assumptions not often discussed.

In Eq. 1, a, b, and c represent the density of the three bands in an agarose gel, which result from running a T7EI mismatch detection assay, depicted in Fig. 1c.

Our previous article describes the T7EI assay in detail, but it can be summarized in three broad steps.

Calculating the fraction of alleles that have an edit from the fraction of amplicons cut by T7EI in the gel (Eq. 1) essentially boils down to calculating the probability that two reannealed strands (from step 2) will have a mismatch. If strands reanneal randomly, we can calculate the probability of each possible reannealing combination (WT-WT, WT-edited, and edited-edited) in terms of the fraction editing, pe (Fig 2). And if we make the simplifying assumption that any mismatch will be cleaved by T7EI, we can calculate the cutting probability for each scenario (Fig. 2).

Once we have defined these probabilities, we can calculate the fraction of reannealed amplicons that we expect to be cleaved (expected fc). This is simply the reannealing probability for a given state i multiplied by the probability that T7EI will cleave state i, summed over all N possible states.

Equating the fraction of reannealed amplicons cleaved in the experiment (fc) to Eq. 2 gives us

where pe is the editing probability and fc is the following experimentally measured ratio (see Fig. 1c)

Solving Eq. 3 gives us the general formula for fraction editing in terms of fc.

Now, all that remains to be done is to calculate (or approximate) pm for a given experiment. We will now outline several ways in which this can be done.

Approximation 1: All Edits Are Unique

If we assume that no two edited strands are identical (i.e. edits are random), reannealed edited-edited strands (from Fig. 2) will always have a mismatch. If there is always a mismatch, we can approximate pm = 1, since T7EI should always cleave the amplicon. Substituting pm = 1 into Eq. 4 gives us

which is identical to Eq. 1 after multiplying by 100! This is the approximation often taken in literature. As a mathematical side note, there are two solutions given by Eq. 4, but, in this case, we can discard the second, which gives a non-physical result (i.e. pe > 1, which violates the requirement that pe range between 0 and 1). 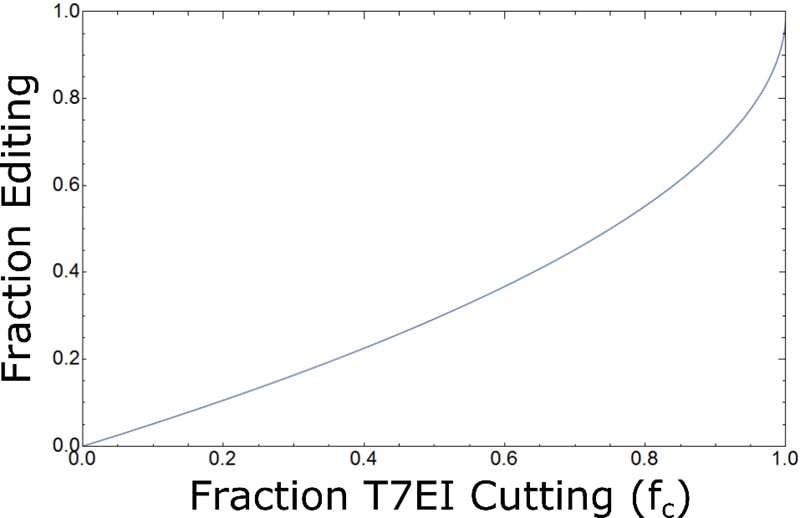 Since this is the approximation most often taken in literature, it is worth noting several key assumptions in the derivation of Eq. 5. These assumptions are likely reasonable in many experiments, but are useful to consider.

There are, of course, other potential concerns common to many assays that we will not discuss in this article: potential PCR amplification bias, gel image saturation, mismatch/deformation bias of the given nuclease (e.g. T7EI versus CEL12).

Approximation 2: All Edits Are Identical

As we saw in the previous section, one key assumption to Eq. 1 is that no two edited strands are identical. What if the opposite were true and all edits were the same? This situation can also arise in the context of genotyping plants (the original application of mismatch detection) when there is a naturally-occurring heterozygous locus.4 In this situation, we can approximate pm = 0 since reannealed edited-edited strands (Fig. 2) are identical and will therefore not be cleaved by T7EI. Substituting pm = 0 into Eq. 4 gives us

which has two valid solutions. In this situation (as shown in Fig. 4), there is no way to determine from a gel image alone whether an fc of 0 is the result of 0% editing or 100% editing! Also, note that it is no longer possible to measure an fc > 0.5, which makes intuitive sense. Under these assumptions, the maximum possible fc occurs when the probability of a mismatch is maximized [2pe(1-pe) in Fig. 2], which occurs at fc = 0.5. 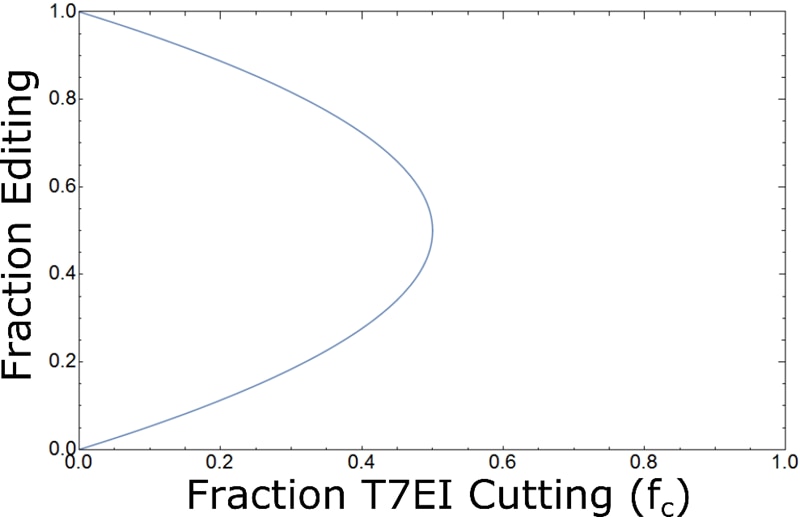 In the first approximation, we assumed that no two edits were the same, and in the second approximation we took the opposite assumption (all edits are identical), which resulted in two different estimates for the fraction editing (Eqs. 5 and 6). It is reasonable to guess that the truth for any given experiment lies somewhere in between. For this approximation, we take the more general case where there are N distinct edits that are equally likely to occur.

νi is probability of selecting edited strand i from the pool of all N edited strands. In this approximation, νi = 1/N since all N edits are equally likely, which reduces Eq. 7 to

Both solutions in Eq. 9 are valid for values of fc that give pe between 0 and 1 (and rational). Notice that limiting values of N in Eq. 9 give the same result as our first two approximations. If all edits are unique, there are an (effectively) infinite number of possible edits (N → ∞), which gives us Eq. 5 (approximation 1). If all edits are identical, there is a single possible edit (N = 1), which reduces to Eq. 6 (approximation 2). 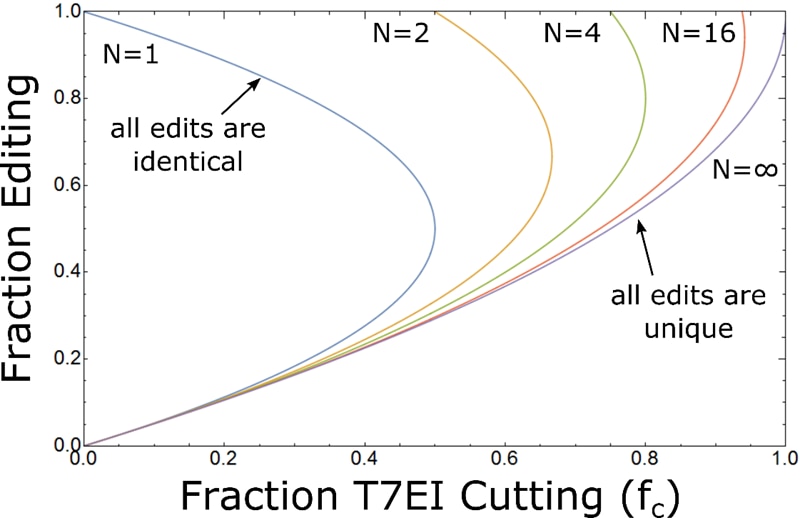 As you can see from Fig. 5, as the number of distinct edits increases beyond N=16, the estimated fraction editing begins to closely approximate the published formula (Eq. 1). Although Eq. 1 is likely a good approximation for most experiments, there is evidence that certain CRISPR editing events will produce highly non-random results with only a few prevalent edits.3 We have also observed this in some experiments (Fig. 6); we treat our estimate of the percent editing as a lower limit and take care to not over-interpret small differences between T7EI assay results. 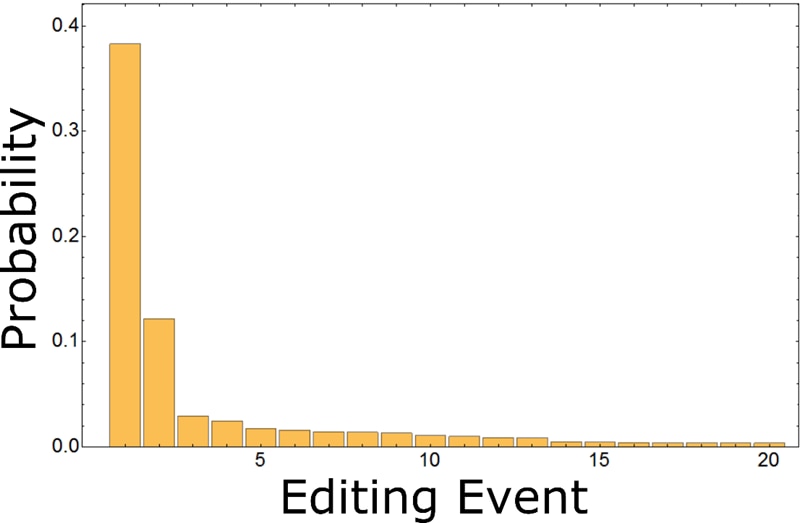 When analyzing mismatch detection assays, we often do not know the underlying distribution of editing events (e.g. Fig. 6), which can differ between target site, target sequence, and cell line. This translates to uncertainty in the probability of two edited strands reannealing with a mismatch (pm in Eq. 4). Due to this uncertainty, it is often best to use the standard equation (Eq. 1) when calculating the percent editing, which provides a lower limit. Keeping in mind that this can be a (sometimes substantial) underestimate of the true percentage editing, we take care to not over-interpret minor differences between different mismatch detection assays.

Using these calculations as a starting point, it is straightforward to begin relaxing other assumptions and testing for their consequences. We hope that taking a closer look at the mathematics has helped make mismatch detection assay analysis easier to understand!

Check out our T7EI Calculator available as part of the bioinformatics group’s beta tools offering (freely available to the public). If you find this tool useful or would like to see additional features added, contact us.