Therapeutics get on point with base editors

CRISPR genome engineering has transformed the life sciences since it burst onto the scene in 2012, allowing rapid advances in fundamental research but also gaining support from regulatory bodies to enter clinical trials as a promising agent in human therapeutics. From disease modeling and drug discovery, through to diagnostics, imaging and molecular recording, the CRISPR toolbox continues to grow. The promise of base editing now showcases the ingenuity of scientists in their inexorable quest to precisely and safely engineer the genome.

While there is excitement and potential in therapeutics, classic CRISPR is not without its limitations and risks

Correcting a single base is technically challenging due to the inherent mechanism of action of programmable nucleases such as Cas9 that break both strands of DNA which most frequently leads to repair by non-homologous end joining (NHEJ) and subsequent indel formation rather than integration of a repair template via homology directed repair (HDR). Not only is CRISPR somewhat crude and sloppy in this context but it also requires cells to be actively dividing for HDR to occur. As invaluable as these “molecular scissors” may be in applications that can get away with the odd snip and jumble, the potential damage that can occur is unacceptable in a therapeutic setting. Predicting, detecting and preventing the insertions, deletions and other chromosomal chaos that may arise has formed a large field of research, but what if there were a more efficient and cleaner way to fix a point mutation, i.e. correcting a genetic spelling error without the need to cut the double helix in the first place?

This is where base editors come in 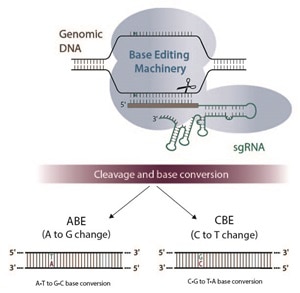 Two research groups led by David Liu (Harvard University) and Akihiko Kondo (Kobe University) pioneered the development of the first generation of base editors for targeted cytosine deamination in 2016, revolutionizing the field of CRISPR-based technologies with sophisticated and precise gene editing agents 1,2. This novel strategy of “precision chemical surgery” (David Liu) is broadly mediated by two categories of editors, namely cytidine base editors (CBE) which catalyze the conversion of C-G base pairs to T-A, and adenine base editors (ABE) that induce A-T to G-C conversion, ultimately facilitating all four transition mutations to be performed without reliance on template-based HDR nor the risk associated with double-strand breaks (DSBs) in the DNA.

Base editor variants and possibilities flourish

Since its debut in 2016, base editing has been embraced by scientists to innovate, optimize, and advance its technical capabilities and precision, thereby generating numerous iterations and flavors of base editors. While base transversions were previously out of the scope of base editor capability, two groups just recently announced that they have successfully developed base editors that induce C-to-G conversion in mammalian cells, thereby increasing the number of targetable human pathogenic single nucleotide polymorphisms (SNPs) 3,4. Dual editors that facilitate simultaneous C-to-T and A-to-G conversion also expand the realm of disease modelling. Additionally, a truly landmark victory for base editing was the recent ability to target and edit previously inaccessible mitochondrial DNA 5. Whether base editors are designed with differing targeting scope to correct point mutations that were previously inaccessible, rendered more precise to avoid bystander or off-target effects and therefore improve their safety profile, or even adapted for hyperactivity to apply in forward genetics and drug discovery research, the list of possibilities continues to grow and entice innovative minds.

Base editing in a clinical setting?

While technical advances break through the realms of gene editing capability, how can these be translated to the clinical setting? Monogenic disorders are a clear example of where base editors can play a crucial role in targeting and correcting a pathogenic SNP. Point mutations that underlie hemoglobinopathies (e.g. sickle cell disease, beta-thalassemia), Duchenne’s muscular dystrophy, some genetic forms of deafness but also Hutchinson-Gilford progeria syndrome, a rare and fatal syndrome of premature ageing, have all been modeled and successfully corrected in a wide range of organisms, not only at the DNA level but also with clear phenotypic improvement, thereby providing a sound foundation for the use of base editing in the development of human gene therapies. Cardiovascular diseases are the leading cause of death globally and while there are many risk factors associated with the non-communicable disease, it is estimated that 1 in 300 people have familial hypercholesterolemia, an autosomal dominant genetic disorder that results in reduced clearance of atherogenic cholesterol in the blood and higher incidence of premature heart disease 6. Base editing may once again provide a solution, as showcased in a trial in monkeys that demonstrated a remarkable decrease in LDL and total triglyceride levels mediated by an ABE targeting two genes in the liver, PCSK9 and ANGPTL3. Base editing therefore has the potential to not only improve blood lipid profile and help prevent heart attacks but also does so in a neat and precise format that avoids the usual, long-term arsenal of blood thinners, statins and other drugs that often burden and compromise the quality of life of people with cardiovascular disease (Verve Therapeutics).

Cancer immunotherapy provides another powerful platform for genome engineering. Immune cell therapies such as engineered, chimeric antigen receptor (CAR)-T cells harness the patient’s own immune system to target and kill tumor cells and have shown high early response rates in humans, specifically in the context of hematological malignancies. However, despite these successful and promising results, durable disease remission remains limited and this treatment strategy has not translated well to solid tumors. CRISPR-Cas9 gene editing has entered clinical trials to fine-tune CAR-T cells for resistance in the naturally immunosuppressive tumor microenvironment by knocking out key genes that ultimately lead to persistence and more efficacious activity. Although preliminary data indicate that CRISPR-Cas9-edited products can be safely infused, it is becoming increasingly clear that more efficient editing at more target sites will be required. Development of an “off-the-shelf”, universal allogeneic CAR-T cell or CAR-T cells targeting the more complex and heterogeneous solid tumor environment will require multiple edits and knockout of up to ten genes simultaneously, thus baring increased risk of translocations and other DNA rearrangements if using standard CRISPR-Cas9 technology. This can be avoided by undertaking a stepwise and iterative approach to each edit, but this would be arduous, slow, and costly, therefore untenable for patients awaiting treatment. Base editors can circumvent this limitation by facilitating multiplex gene knockout via introduction of a premature stop codon or by disrupting key splice sites within the target gene(s), thereby inhibiting expression of the target protein(s) without causing DSB or subsequent off-target effects. Gene editing using base editors will allow efficient and cleaner fine-tuning of the CAR-T cell therapy and drive efficacious and persistent elimination of cancer cells.

An exciting and promising future for base editing

Further work is required to optimize and demonstrate the safety and efficacy of base editors for use in the clinic, and a concerted effort from governing bodies, clinicians and researchers will be required to streamline regulatory processes in this era of rapidly advancing genetic engineering. However, the breakneck speed of base editor development combined with the promising results to date and the modularity of the tool in diverse applications, highlight the exciting contribution that base editors will make in treating, or even curing, human diseases. 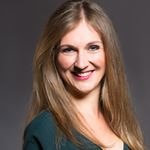 Jennifer Harbottle holds a PhD in cell biology from the University of Aberdeen.

For more resources on base editing see these articles: