Therapeutic promise of base editing

Sickle cell disease is a devastating monogenic disorder caused by a single nucleotide substitution (A to T) in the human beta-globin gene, resulting in the amino acid change Glu to Val. This mutation causes polymerization of hemoglobin into long filaments under low oxygen conditions and leads to red blood cells forming a characteristic sickle-like shape. Due to the abnormal aggregation of the hemoglobin protein, these cells become rigid and occlude the capillaries, resulting in severe pain crises, anemia, and other life-threatening health complications.

Sickle cell disease is a great candidate for gene therapy

First, the disease is predominantly caused by the same single nucleotide change, allowing for universal approaches to correct that mutation. Second, blood stem cells (also known as hematopoietic stem cells, or HSCs) are easily accessible and are amenable to editing ex vivo (unlike, for example, liver or muscle stem cells). The diseased hematopoietic stem and progenitor cells (HSPCs) can be isolated and modified in the lab using CRISPR-Cas9 based technologies. A Cas9 nuclease can induce a double-strand break (DSB) near the mutation site and stimulate the innate cellular DNA repair pathways to fix the break by using an exogenously provided DNA donor template via homology-directed repair (HDR) pathway. The corrected cells are reinfused back into the patient after undergoing regulatory testing. The stem cells have an ability to home back to the patient’s bone marrow and provide a life-long supply of healthy (corrected) cells.

Although CRISPR-Cas9 HDR-based gene editing can correct the disease-causing mutation, and has proven to be a workhorse for most research projects, this technology is not without drawbacks when it comes to use as a therapeutic agent. HDR levels remain suboptimal, despite a lot of research aiming to optimize efficiency of the DNA repair pathway. Additionally, induction of DSBs in the cells can cause toxicity and lead to cell death, impacting cell yield and hindering cell and gene therapy applications. CRISPR-Cas9 HDR-based gene editing is also associated with the possibility of off-target editing when DSBs are introduced in places in the genome other than the intended target site, increasing the concern for large chromosomal translocations.

Base editing is an ideal technique for more precision

Base editing has entered the scene as a promising alternative to CRISPR-Cas9 HDR-based gene editing, allowing nucleotide base conversions without breaking the DNA helix. First developed by David Liu’s lab, base editing components include a guide RNA and a Cas9 nickase (nCas9), fused to a deaminase, which deaminates either C to U, or A to I on the non-target DNA strand. nCas9 nicks only the target strand, avoiding DSBs. Current base editors can support C:G to T:A (Cytidine Base Editor, CBE), A:T to G:C (Adenine Base Editor, ABE), and C:G to G:C (C to G Base Editor, CGBE) changes. However, none of these editors can provide A to T changes, which would be required to correct the sickle mutation back to wild type.

In a recent paper in Nature, Newby et al (1) came up with a clever method to use ABE to correct a sickle mutation. Instead of correcting sickle mutation to wild type (which is not supported by current base editing technologies), they converted sickle mutation to Makassar, a naturally occurring non-pathogenic variant.

When testing this method in HSPCs from patients with SCD, they were able to achieve 80% conversion from sickle to Makassar globin ex vivo. Next, to assess the long-term durability of edited HSPCs, cells were transplanted into immunodeficient mice. Sixteen weeks after transplant, editing efficiency was higher than what has been reported with HDR-based editing (2-6) with a frequency of edited cells of 68%. Additionally, Makassar beta-globin represented 79% of beta-globin protein in the blood of mice, and sickling was significantly reduced, which highlights the effectiveness of this approach and suggests a potential for future therapy. 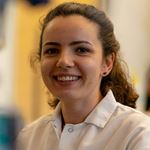 Dr. Anastasia Lomova Kaufman is a Scientist II in the R&D Base Editing team at Horizon Discovery. Since joining the company in January 2021, her work has contributed towards developing and improving Horizon’s Pin-point base editing technology. Anastasia obtained her PhD in Molecular and Medical Pharmacology from University of California, Los Angeles, where she first got introduced to gene editing and became intrigued by its potential for cell and gene therapy.

Have questions? Reach out to our team, we are always happy to help!